College tuition has been a critical issue with students across the United States, especially as costs continue to skyrocket every year.  However, President Obama recently outlined a series of changes that he felt are necessary to help keep college tuition costs from getting any higher.  According to the president, higher education is an extraordinarily important topic to address, and colleges cannot continue to increase their tuition rates.  The president’s speech, which was presented at the University of 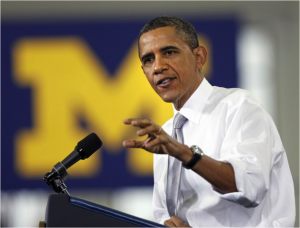 However, the key question to ask now is what changes the president plans on creating in order to help students pay for higher education.  The general gist of the president’s speech was that Congress has to bring a slew of changes to the federal-aid program.  In order to get colleges to reduce tuition rates, there needs to be an increase of federal grant money for low-interest loans, and this money will be tied to a college’s ability to lower its tuition.  In other words, universities will qualify for more federal aid in the form of Perkins loans, work-study programs, and additional grants if the schools manage to keep their tuition rates from increasing.  If colleges fail to meet lower tuition standards, then they face the risk of losing a certain degree of federal monetary aid.

On the other hand, the president did state that additional funds would be pumped into Perkins loans, increasing the overall loans coffer from $1 billion to $8 billion.  Furthermore, President Obama stated that he wants Congress to create a new program, which would consist of $1 billion, and the money from the program would go to colleges that actively try to keep tuition rates down.  Another $55 million will be given to individual colleges that work towards operating more efficiently.  In essence, the new fund system, not including the Perkins loans, would act as monetary incentive to colleges across the country.  Under the new program, universities will be rewarded for keeping their rates down, but there is a chance that some schools would not receive incentive money if they fail to comply with the rules.

Though the new program seems to be exciting news for students in the United States, there are a lot of issues to tackle before undergraduates, as well as graduates, can leap for joy.  One issue is the fact that the president’s new plans for college are rather pricey, and there is little faith that Congress will want to pass the legislation.  Many people, including university presidents, feel that there is a certain ambiance that has been prevailing in Congress for the past few years.  Since the price tag of the financial changes is so high, individuals like Terry W. Hartle, vice president of the American Council on Education, think that the necessary changes for education reform will not come to fruition.

The issue regarding funding for the increase in Perkins loans, as well as extra incentive money, brings about two other issues.  First, by connecting federal money to tuition, there is a chance that colleges will lower students’ education experience by increasing classroom sizes, cutting down on professors, and decreasing university efficiency.  Second, the slashing of state budgets has caused a serious negative impact on colleges, and has brought up the question of how the president plans on funding the tuition plan.  The decline in state dollars seems to be a sign that the U.S. may not be ready to fund such an extensive program like the one the president outlined.

Overall, it is refreshing to see President Obama address the issues regarding higher education for students in America.  The cost of going to college has been steadily getting more expensive, and it is imperative that it be addressed sooner rather than later.  However, it is clear that there are a lot of questions that must be answered in regards to how universities will be affected by federal aid being tied to lowering tuition rates.  Hopefully, the president will be able to better illustrate how the funding plan will actually work, and address any repercussions that may come about.  Nevertheless, it is wonderful to see the president working on critical issues that have been affecting students.