Phillip Parker grew up in Tennessee with a loving family and a supportive group of friends. He was upbeat and energetic throughout most of his childhood, and was respected by many. He was also openly gay. Unfortunately, with his confidence in being out of the closet came the consequence of bullying. To a number of teens at Phillip’s school, being gay was perceived to be a choice, and a wrong one at that. Therefore, each of these youth felt that it was their right to put Phillip in his place; it was their job to bully him for being different.

As the physical, verbal, and emotional abuse continued, it was difficult for Phillip to remain strong in his own skin. He knew that being gay was not a path that he had chosen; it was not up to him. But after being broken down relentlessly every day that he went to school, Phillip found it hard to even breathe anymore. Why were his classmates beating him, telling him that he was wrong, or convincing him that he was bound for hell? With the weight on his chest too heavy, Phillip decided to take his life at the age of 14.

The devastating fact is that this was not a one-time incident. A simple Google search of “gay teen suicide” is enough to show you how many kids end their lives each year because of bullying at school. In fact, LGBT youth are four times more likely to commit suicide than one of their heterosexual peers. The intolerance and ignorance shown at school to youth of all ages is disgusting, and needs to be ended. The question is “how?”

Upon researching methods for ending suicide among LGBT youth, I came across a number of ideas and opinions. One hot topic that intrigued me was whether 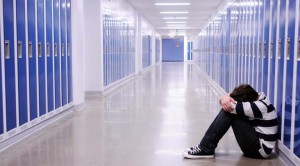 the legalization of gay marriage will result in a decrease of gay teen suicides. Firm believers claim that homophobes have “blood on their hands”; those in strong opposition insist that the straightforward facts and statistics on LGBT teen suicide rates are somehow misleading.  After seriously considering both sides, I surprised myself by the conclusion I made; I do not think that legalizing gay marriage will end suicide among LGBT youth. It’s almost hard for me to type that, being such a strong supporter of gay rights. While I do think that legalizing gay marriage would eventually have positive effects on our youth issues, I believe that taking other steps first would provide a quicker solution.

My reasons for not picking gay marriage as the fixer for LGBT suicide rates are based on American history. In 1865, the 13th amendment that ended slavery in the United States was passed by the House of Representatives. In 2012, prejudice against blacks still exists. In 1920, the nineteenth amendment gave women the right to vote, making them seemingly equal. In 2012, women in the US earn roughly .77 cents for every dollar a man earns. Freedom and equality is what we preach, but why? The years and years that it has taken us to get this far are enough to prove that passing a law does not necessarily fix a problem.

Lessons of tolerance are crucial for our country to eventually reflect our “values.” I think that in order to change opinions about LGBT peoples and reduce the teen suicide rate among them, the minds of our youth need to be opened. The approach that I would like to suggest taking should come from the school systems and have two different aspects. Education on tolerance and bullying should be one part, and the availability of counseling for LGBT youth should be the other.

Bullying alone should be addressed in schools, regardless of whether or not it is targeted at LGBT youth. Programs like “Safe School Ambassadors” provide youth with a two day training class that teaches them how to prevent bullying. The kids learn through videos, reading, and role-playing how to find real solutions to bullying and what to do when it happens to them or someone they know. To date, the program has successfully trained over 60,000 students and 5,000 adults. While addressing tolerance of sexual orientation in these lessons would be most beneficial, bringing that topic into schools is hardly held in high regards. Even so, the inclusion of a program like this in schools across the country has the potential to greatly decrease LGBT teen suicide rates.

Counseling for students is available at schools, but being educated and able to address LGBT teen issues in schools is often not. Whether a depressed or suicidal student is being victimized at home or at school, they need someone to turn to without having to ask. Often, these youth feel afraid to go to their parents, their friends don’t understand them, and so they are left with no one. With a counselor readily available to talk to and console these youth, I believe that suicide rates would drop.

Tolerance has to be taken to the next level in schools. Our children are our future, and their thoughts and ideas will reflect our country’s molding values.Teachers and administrators cannot stand by any longer while the number of gay teen suicides rises each month. Education on bullying and providing LGBT youth with someone to lean on is what we should focus on in order to put an end to the growing number of suicides.