The other day I was waiting in line at my local Starbucks, and noticed the coffee shop was selling what appeared to be bracelets.  Upon further inspection, the bracelets claimed to be a part of a national job creation program.  Anyone who purchases a bracelet for $5 or more is showing his or her support for Starbucks’ grand plan to revitalize the economy during these difficult times.  However, it was never clear to me exactly how Starbucks planned on getting our stalling economy up and running again.  The bracelets did not have an in-depth explanation on what Starbucks planned on doing or who were the recipients of my $5 contribution.  So, I decided to a little research to figure out whether or not I should buy the bracelet and get my college community involved in this job creation program.

As most people know, Starbucks is one of the most well-known coffee chains in the United States as well as abroad.  Howard Schultz, the current CEO of Starbucks, has made it his mission to make sure Starbucks keeps its customers satisfied by providing excellent coffee as well as top rate customer service.  In 2009, due to the recession, he was forced to make the difficult decision of closing 300 Starbucks stores as well as cutting thousands of jobs.  Nevertheless, Schultz has jumped back from those dark times, and has decided to help invigorate the U.S’s economy by creating a loan system that will not include banks.  How is this system going to be made possible?  To make it simple: by every day customers like you and me, and of course the coffee giant itself. 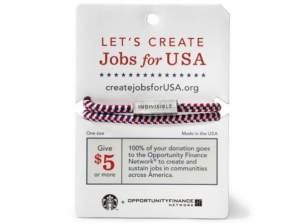 The idea is known as Create Jobs for USA, and it is a partnership between Starbucks, a lending institution, and customers.  Starbucks has decided to collaborate with Opportunity Network Finance, the lending institution, which will provide loans to small businesses that have been refused loans by banks.  Customers who purchase the $5 bracelet will be giving 100% of their contributions to the loan system, which Shultz claims will help create thousands of jobs via these small businesses.

Of course, the next question is who will be paying for the production of the bracelets, marketing of the idea, and anything else associated with Create Jobs for USA?  Surprisingly enough, the answer is Starbucks.  The company has decided to foot the bill of the bracelets and associated costs through its own accounts.  Overall the whole plan seems rather ingenious, and quite interesting to say the least.  However, one lingering thought that continues to linger in my mind is the sustainability of Schultz’s new job program.  What if small businesses are unable to keep themselves up and running after they have received loans through Starbucks’ loan system?  Since the economy is doing so poorly right now, there is a fear that a small business may be unable to survive; even after it has been given a start-up loan.  The other issue then is, how does Starbucks figure out which small businesses should be given loans and which should not?  There has to be a set of criteria for ascertaining which businesses should receive the Starbucks loan.  If Starbucks ends up giving loans to businesses that are unable to stay afloat, then it will have created jobs only to have them lost again if the business is unable to survive.  Not only that, the small business owner will be left with a loan to pay, and perhaps no way to pay it.

The Starbucks job program is an extraordinary idea that has come about from a surprising place; a coffee chain CEO’s mind.  There are positive aspects to the program, but at the same time there is room for doubt and questions.  However, I personally have decided to go out and buy the $5 bracelet in the hopes that my $5 will go to a small business that will prove to be prosperous in the near future.  After learning more about the program and understanding the message behind the bracelets, I personally believe the program has some potential.  The important thing for other young people, as well as adults, is to understand the significance of researching new initiatives before blindly taking part in them.  Buying a bracelet from a well-known company may seem like a great idea at the time, but if you do not know what the bracelet signifies then you do not know who or what you are supporting.  Now that I know more about the Starbucks job program, I will be spreading the message to my college buddies, and let them decide whether or not the program is something they support.