On October 5th, Steve Jobs passed away and left behind a legacy that is marked by products such as the iPad, iPhone, iPods, and of course the sleek Mac book.  Jobs was knows as the brilliant mastermind behind a plethora of Apple products that 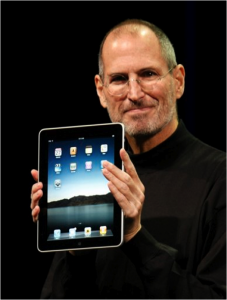 revolutionized how people thought about the personal computer, music, and technology in general.  However, the gadgets that many people bought for pleasure or luxury were the same gadgets that provided immensely to education as well.  Apple products not only made their way into thousands of schools across the country, but they also made a significant impact on the Autism community.

One of Apple’s most commercially successful products, the iPad, has become a source of great happiness for thousands of autistic children.  The sleek tablet computer has an easy to use touch screen with thousands of applications to help children with autism learn how to speak or provide them with alternative methods of communication when they are unable to communicate verbally.  An excellent example of an application that focuses on increasing communication through a non-verbal medium is the Grace app.  The application was created by a woman whose daughter was born with a non-verbal Autism Spectrum Disorder (ASD).  Grace app is meant to be used as a Picture Communication System that stores pictures of various vocabulary words.  A child using the app has the opportunity to use the pictures to tell someone how they are feeling, what they want to eat, and a myriad of other desires.  The app is also meant to help improve verbal communication by having the child point out pictures that the listener will then pronounce for them.  After listening to the pronunciation of the word, the idea is that the child and listener will continue working on the words until the child is able to say the words by him or herself.  If a picture of a vocabulary word is not found, the app allows users to take pictures of an object and include it in the library of words, thus increasing a child’s word selection bank.

The application is popular with many parents and teachers who live or work with autistic or special needs children, and has attracted the attention of others as well.  Recently, the Grace app was selected as the winner of the United Nations World Summit Award Mobile.  It has been praised for its contribution to the autism and special needs community, and at $38 is considered to be a budget friendly application.  However, it is important to remember that the application was created for products that, though considered feasible by many, are way out of budget for others.  The application is available for the iPhone, iPod touch, and the iPad, but families with autistic children first need to purchase one of these items in order to use the Grace app.  Though the application is most certainly innovative, it might be nice to see if it could be incorporated into something that can be used on something cheaper.  Perhaps the program could be tailored into a Leap Frog sort of system or one that could be used on any phone that has an internet connection.

Nevertheless, the Grace app is an amazing application that has made a difference in the lives of thousands of autistic and special needs children.  It shows the power of technology, and how technology can be used for more than just games and video downloads.  The application also highlights the reason why Apple is considered to be one of the most innovative companies in the world.  Steve Jobs not only transformed music and computers, but he also provided technological avenues for the special needs community.