Skimming over the New York Times this morning, I noted that the first article in their global edition was regarding the outrage that Oxfam is uncovering about Ugandan settlers being displaced on behalf of the Ugandan government and an international organization. Despite being a catchy headline on a leading newspaper, unfortunately 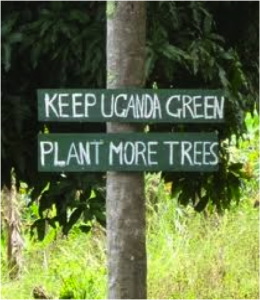 these practices are done every day. The article continues with an explanation that this land has been in legal limbo for many years, and the reason the people are being evicted is that Uganda wants to plant forests to combat global warming.

This article has taken my mind in divergent paths. The first led me back to my academic readings where I was reminded of Paul Collier’s book The Bottom Billion where he discusses the effects of the “natural resource trap”. This essentially means that an impoverished nation will be less likely to break out of poverty when valuable resources are discovered due to the ensuing power struggle over the eminent wealth. In Africa, this has often been tied to the discovery of diamonds, oil, or minerals. If you are confused as to how this relates to this situation of Uganda bear with me.

In 2005, the Kyoto Protocol was initiated and a caveat to this agreement was the carbon-trading program. Under this program, a developed nation that is exceeding their emissions levels can pay another nation to implement a project to counteract the developed nations pollution; essentially paying to cancel one another out.  Coming back to Uganda, this is the essential reason why a forest is being built on the land where squatters live. The government has realized that they can capitalize on foreign investment by appealing to their ability to help circumvent the Kyoto Protocol in using “available” land for forests and green technologies.

While Uganda is just one example of these practices making it to the front-page news, I can’t help but wonder if we will begin to see many more stories like this emerging. Perhaps other African nations are already in the process of maximizing their land use in conjunction with foreign donations. Is open arable space a new addition to the natural resource trap? Just as other resources lend themselves to be exploited on the international markets, paying a nation in exchange for carbon emissions leaves little accountability on behalf of the developed nation to monitor how funds are allocated within the receiving nation. In the case of Uganda, it is clearly not being diverted into responsible government programs targeting aid or assisting the poor.

The second direction my mind wanders when reading this article is in part due to the ongoing Clinton Global Initiative conferences taking place right now in New York City. One of the topics that Clinton addressed directly was the inevitable future emergence of climate refuges.  As defined, climate refugees are people who will be forced from their homes or countries due to the effects of global warming. Whether due to drought or rising sea levels, Clinton foresees that the world will soon see greater numbers of refugees fleeing towards stable and developed economies for assistance. While his discussion was focused primarily around the legal restructuring necessary for the future, the immediate implications of climate refugees are already being felt.

So, would the displaced people of Uganda qualify as climate refugees? The very reason they have been displaced initially is to curb the effects of global warming.

While I am glad the practice of offering land to international corporations at the anguish of its inhabitants is being addressed with greater attention, I hope that in the future we can do more to regulate and prevent these misappropriated attempts at doing good. While trying to offset a carbon footprint (although understandably this whole practice is based in a corporate bottom line) we as consumers cannot attempt to congratulate companies when these “green practices” may in fact be doing more harm than good.