Anyone having read aid literature is familiar with the stories about underfunded and overcrowded disease clinics throughout Africa. Where patients don’t have the means to pay for treatments, and often medications are in too short supply. These grueling stories tug at the heartstrings of foreign donors, and because they are so far removed from a developed nation’s periphery, these stories are often the first in the toolbox used to elicit aid.

There is, however, a much less “sexy” story mounting itself parallel to these narratives, and one that is growing to look very similar to the problems manifesting themselves in the West. Where communicable or “sexy” diseases such as HIV/AIDS, malaria, and hookworm are often the hot topics that aid money is directed towards eradicating, noncommunicable diseases (NCD’s) are on the rise throughout the world. Cancer, diabetes, and heart disease rates are increasing rapidly and developing countries are realizing a growing need to address these issues.

On September 19th of this year, the UN held its second meeting ever discussing health (the first was regarding HIV/AIDS in 2001), issuing a declaration against NCD’s. The declaration specifically targets cardiovascular diseases, cancers, chronic respiratory diseases, and diabetes. The document then proposes measures to reduce the consumption of tobacco and alcohol, promote healthy diets including targets towards children, and encouraging healthy and active lifestyles.

Until recent history, obesity and similar diseases have been considered a rich man’s burden. However, the flaw in this theory is that it is only focusing and comparing the richest and poorest countries. In reality the greatest numbers of countries fall along the developing and middle-income continuum, and without doubt these diseases will begin to manifest as countries become more developed.

Affluence and urbanization mean new kinds of unhealthy lifestyles. Developing countries already bear more than 80% of the burden of chronic illnesses. Their share will grow—at a time when older diseases are still ravaging the poor. In India over two-fifths of children under five are malnourished, yet obesity is mushrooming.

Here is a clear example of a country caught between two worlds.

Why have the developing nations taken so long to recognize these hurdles? Is it because we feel guilty that along with our monetary donations we export a society of fast food and consumerism towards these nations? Do we not want to recognize that these lifestyles are creating expectations as well pollution, causing an increase of these NCD’s? I don’t know the answers to these questions, but I will bet it is because we ourselves have experienced the effects NCD’s, and this begins to hit too close to home. In the US, if we cannot seem to reach our own citizens suffering from diabetes or cancer, why would we help those abroad instead?

If my thoughts are correct, I believe we need to fundamentally shift the way the developing world offers help for disease control. With 63% of all deaths caused by NCD’s already, the World Health Organization estimates that this will increase 17% over the next decade.

In the same Economist article, they state that these new emerging syndromes are manifesting in unison with the previously targeted diseases. For example often 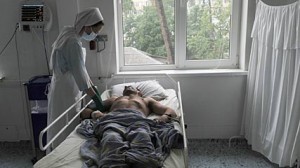 tuberculosis patients are also diabetic. Where funds are available for treating the TB, nothing has been allocated towards providing support for the diabetes. This is the first and most fundamental change that must be made globally: funding must be made available to be used as needed. If a cancer unit or dialysis machine is concluded to provide a greater good for an area, then that is where funding should be going. Secondly, I believe that the developed world bears the burden to be the exemplars of positive lifestyle changes that will make life and the earth more sustainable for our growing and longer living population.

I do not in any way propose to stop funding preventable and transmittable disease. However, I believe that we must recognize that as we see successes in tackling some disorders, the donors must be flexible in understanding where the next hurdles lie. I am happy to see that the UN has taken the helm in recognizing the next step in the direction of health, even if it is not as sexy as before.