Chile, one of the wealthiest countries in Latin America, has been going through its own array of protests and demonstrations these past few months.  In the past, students did not take a great degree of interest in their country’s political decisions, but the tide appears to be changing. Though the student population of Chile has recently taken a great degree of interest in many issues such as transportation and energy reform, they appear to be extremely adamant about education reform.  Chilean students have taken to conducting peaceful protests, like kiss-ins, dances, hunger strikes, as well as other protests of a more violent nature, to capture the government’s attention.   The goal is to have President Sebastian Piñera’s government take a greater interest in the education system, and bring about changes that will benefit students.

High school and college students have taken it upon themselves to demand a widespread education reform in their country.  Tens of thousands of students are asking the government to increase funding for public education.  For years, students have asked that middle and elementary school education be reformed, but recent sentiments are reaching higher education as well.  Students demand that the government make tuition for universities more affordable in order to make higher education accessible to everyone.  Since college tuition is so high in Chile, many students are unable to pursue a higher degree because they are unable to pay for school.

Issues with university education began under the dictatorship of General Pinochet in the 1980s, when he encouraged the formation of private universities.  The private universities became so pricy that students began to realize they were either unable to afford schooling or could not pay off the debts they had accrued.  Though General Pinochet’s regime has come to an end, education is still a major sticking point with parents and students in Chile.  Unfortunately, since the problem has yet to be solved, some protestors have become increasingly violent with their demonstrations.

On August 4th, thousands of students held a peaceful demonstration in Santiago, the capitol of Chile, which quickly became violent when masked protesters broke off from 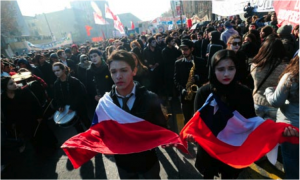 the crowd. The protestors began to loot shops, burn various buildings and cars, and clash with the police.  Though the violence was eventually quelled, the problems over education reform remain unsolved.  President Piñera recently put out a list of twenty-one reforms he was willing to put into action.  The reforms included: increased funding for education, more scholarships, teacher training sessions, aid for those struggling to pay their student loans, and many others.  However, student leaders rejected the reforms, stating that they did not solve the crux of the education reform issue, and continue to protest.

Though the education reform issue is still up in the air in Chile, it will be interesting to see what the outcome will be.  Unfortunately, many students right here in the United States can say that they sympathize with Chilean students.  Tuition prices for public and private universities go up on a yearly basis, and it can be extremely difficult for students to secure loans or scholarships to pay for school.  However, the interesting point to learn from the situation in Chile is that students are the ones who are primarily involved in their education reform.  This is a point that students right here in the U.S. should take into consideration.  Too many times it seems as though students are uninterested in issues that directly affect them, and simply complain about high tuition and book prices.  Education reform has been a major point in the U.S. these past few months, and students seem to be the least enthused about an issue that directly affects them.  Perhaps it is time for students to join in on the conversation, and take part in making decisions that affect their education for years to come.