I am all for freedom of speech but not when it becomes abusive and offensive.  On Wednesday, the New York Post released their daily newspaper displaying a controversial image and relaying what many are calling a highly absurd and unreasonable message to the public.  The Post, in their attempt to metaphorically compare the recent highs and lows of the stock market, provide this headline: “Crazy 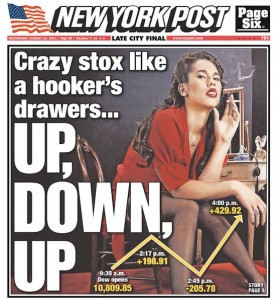 stox like a hooker’s drawers…UP, DOWN, UP.”  Accompanying this headline is what appears to be a decades-old stock photo of a pin-up girl and a chart in the corner displaying the DOW’s daily ups and downs.  While many media folks were taking humorous stabs at the Post’s outrageous cover because of its out-dated use of the word “drawers” and photo from the 1940’s, as well as its nonsensical comparison between stock market chaos and prostitution, some are focusing on the deeper issues surrounding such irrational messages—insensitivity that fuels societal stigmatization of vulnerable young girls and women.

Rachel Lloyd, a leading anti-trafficking activist and founder of Girls Educational & Mentoring Services (GEMS) in NYC, as well as a survivor of sex trafficking herself, provided this response to the Post’s cover on her official Facebook page:

“Not surprised by the Post, after all its the Post but still….this is so offensive and frustrating. In group tonite, we processed a lot about the challenges of people’s perceptions of girls and women in the life and how hard it is to deal with so much stigma. This crap just feeds into those perceptions.”

She poses an important perspective on media messages and their influence on the perceptions of the general public.  Advocates have been working long and hard to educate the public about the realities of human trafficking, as well as prostitution—which carries a heavy negative stigma although many cases are that of sex trafficking—and challenge misperceptions.  While more and more individuals are beginning to understand the victimization aspect of those being trafficked or prostituted, highly publicized images and messages such as that provided by the Post can create setbacks.  In order for sexual exploitation to become non-existent and anti-trafficking efforts to be successful, people need to be given information that is correct and that eliminates the shame experienced by those “in the life,” a common term used to refer to organized commercial sexual exploitation and those trapped in it.

Insensitive messages can create re-victimization.  The term “hooker” is derogatory.  Used alternately with other terms such as “prostitute,” “whore,” and “slut,” it paints a very ugly and dirty image in the minds of many.  However, what is not often considered is what circumstances drove an individual to fall under this offensive label—an individual who has been abused emotionally, physically and sexually; one who has been coerced and victimized by those in positions of power; one who has experienced severe forms of harm and violence; one who has been stripped of dignity and basic human rights.  By discounting or minimizing these experiences and glorifying sexuality as a commercial commodity, one that is wrapped up in jokes and negative connotations, positive and sustainable developments in eliminating sexual exploitation will continue to be difficult.  It is important to be mindful of the impact messages and language can have on others.  We do not want to regress as a society nor re-victimize those in vulnerable positions.

If you find the Post’s cover offensive, GEM’s provides contact information to let it be known: