Yesterday, Ryan wrote the third post in our series discussing the current situation in Dadaab Refugee Camp in Kenya. He talked about the need for mental health care and social entrepreneurship services in Dadaab, as they crucial in enabling the refugees to eventually leave the camp and rebuild their lives. Both of these services, along with medical treatment and evaluation, providing food and water, and giving other kinds of aid and relief, should be part of a bigger, overall strategy established to efficiently and effectively accommodate, treat, and empower refugees at Dadaab camp.

This relates back to the nonprofit disconnect – something I’ve written a lot about this summer – which occurs when many nonprofits work independently to tackle a multi-dimensional problem. Organizations would be far more successful if they coordinated with each other and formed an overall strategy with individual plans for each nonprofit. At Dadaab Refugee Camp, the situation is similar – many different organizations working at Dadaab may seem like a great idea, and it is surely filled with good intention.  However, there may be many international governments, NGOs, and other aid organizations working to bring emergency relief for more than 400,000 refugees, but how can they be as efficient and effective as possible without coordinating with each other? If they’re not all working together, it can be an extremely disorganized operation, which leads to even greater suffering of the refugees.

But why does this happen? Why do good intentions sometimes fail to translate into good actions?

In a time of emergency – like the situation at Dadaab – it is all to easy to simply act by reacting rather than to act with a plan. Acting by reacting means that governments, 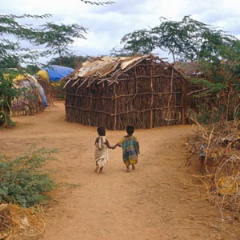 NGOs, and other aid organizations immediately respond to emergencies by pleading for donations and spending them right away according to their own agenda. This is instead of truly analyzing the situation and creating a plan for their independent organization that fits into the overall strategy put forward by the entire team of organizations. Yes, this type of response may take a bit more time, effort, and strategy, but it would lead to a much more successful operation in Dadaab.

On the other hand, Dadaab is not a new camp, and many of the aid organizations have been working there for years. With hundreds of new refugees arriving everyday, I understand that the organizations have been presented with new challenges. However, after years of supplying aid and providing treatment, I really think they’ve had enough time to develop a coordination strategy with other organizations. The camp is run by the United Nations High Commissioner for Refugees (UNHCR), and after years of operation, they certainly could have established a plan with any other aid organizations that wanted to help their efforts.

Could it be that with each organization working toward their own agenda – and believing that their agenda is best – leads to an unwillingness to coordinate with another? In a recent post, Thenera discussed how collaboration often occurs when there is a particular benefit to the organization, like a financial or branding opportunity. Many organizations working at Dadaab may believe in the same cause – to help the refugees – but each also believes that their own method is the best way to achieve success. This hesitance to compromise alone can unfortunately prevent any type of coordination from happening.

Not only is there a disconnect among organizations in Dadaab, but also between camp officials, donors, and the refugees themselves. The key here is transparency. There needs to be transparency in all areas of the spectrum to ensure that dollars are being spent correctly, aid organizations are cooperating with each other, and refugees are getting each and every service that they need. Greater transparency also establishes a much stronger connection between donors and refugees – donors will be more aware of exactly where their money is going to, and they feel more connected with the situation happening across the globe. This could lead to an increase in donations, which would certainly help to ameliorate Dadaab’s current financial struggle.

There also lies a much greater disconnect at Dadaab: the disconnect between this entire situation and the rest of the world. Why is it that conditions in the Horn of Africa and in Dadaab Refugee Camp became so extreme before it got enough media attention to tell the world about it? Does it even have enough attention now? I consider myself pretty well-informed about what happens in various parts of the globe – especially in developing countries – but I think that’s only because I make the effort. I seek out current events, follow numerous nonprofits and news organizations on Twitter, and never rely on the local – or even national – news to find out, well, news. But what about everyone else? Warnings and predictions of the drought in the Horn of Africa date back to before December 2010. That’s eight months ago! But it seems like it was only last month, when the word “famine” came into play, that the world began to really take notice of the situation affecting more than 10 million people.

It’s a truly scary thought. Did the situation in East Africa really have to escalate to famine conditions for people to take notice of its severity? Did Dadaab have to accommodate almost five times the amount of refugees that it was built to contain before people became aware of an overcrowding issue? It seems that this is where the ultimate disconnect lies.

But how do we solve this? I think it primarily takes individual responsibility to be informed. However, if that individual effort is kicked up a notch, it could make real change. For example, if I read about warning signs of the drought months ago, I could do more than just think about it – I could tell my friends about it, tweet about it, write a blog post about it, and even contact media sources and pressure them to cover the story and increase awareness. In today’s world, social media platforms make it much easier to communicate with the world, and we should certainly take advantage of that. The local television news is no longer the only way to find out information. Each person truly does have the power to report their own story, and for those who are well-informed on current events around the globe, perhaps taking that extra effort to spread the word could make a huge impact.

In case you missed it, check out previous posts in our series about Dadaab: Part I, II, and III.