August 1st will mark the start of the fasting month of Ramadan, as well as a new obstacle for the countries involved in the Arab Spring.  Ramadan, for those of you not on top of Muslim practices, is a month-long fast during which devout Muslims cannot eat or drink during the daylight.  The fast is supposed to teach patience, humility, and spirituality, as well as self-disciple, self-control, and sacrifice.  Extra prayers and readings of the Qur’an are encouraged, with especially devoted Muslims going to nightly special prayers in mosques instead of just the weekly prayers held every Friday.  Acts of charity are also encouraged, particularly feeding the poor (after sundown).  Ramadan, being one of the five tenants of Islamic belief, is an extremely important month for Muslims, and while I have presented a simplification of the traditions associated with the fast, hopefully it has been enough to make you realize that it is going to have a massive impact on the Arab Spring movement.

What no one is quite sure of at this point, though, is which direction things will go.  Will everything grind to a halt, or will Islamic groups grow even stronger?  On one hand, Ramadan is a time for cooking, social gatherings, and contemplation, which means that the protests could cease as people focus on their faith and their families. 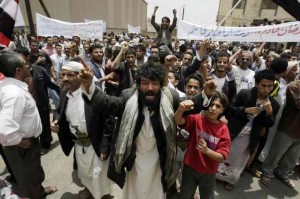 On the other hand, mosques already often serve the hubs for the protests, and the special nightly prayers during Ramadan will give people extra time to talk and plan.  The rebels won’t be able to fight during the day, since going without food and water during the hottest month of the year is not conducive to active rebellion, but the nightly meetings could help the movement regain momentum.  Also, prices typically rise during Ramadan, and that added economic burden could give people another reason to demonstrate.  Arab governments, however, often offer pardons or commute sentences for political prisoners during Ramadan, which to some suggests that the regimes might be able to finally reach a truce with the opposition.

As if the effect of Ramadan was not already difficult enough to predict, we must also consider the possible actions of non-Muslim forces like NATO and the UN.  NATO stated that it would stop bombing Libya during Ramdan if Gadhafi also agreed to a cease-fire, at least for the duration of the holy month—though NATO would prefer it if he agreed to a permanent cease-fire and to step down.  If Gadhafi does not agree to stop fighting NATO will be in a difficult position.  The potential damage caused by European/North American countries bombing an Islamic state during the holy month could be massive—but on the other hand so to could the damage caused by stopping air strikes entirely.  Rebel forces and Gadhafi have asked the UN to un-freeze assets to fund Libya through Ramadan, and though the UN still has not responded one way or the other, Turkey has agreed to give aid to the eastern rebels.  The fear here is that the added burden of Ramadan on top of food, fuel, and cash shortages will cause the public to lose faith in the rebel governments and abandon the cause.

With just one week left till Ramadan there’s still no telling what could happen.  It could be a black hole that undermines the entire cause, or a catalyst that unites the rebels, or prompt a truce between the rebels and the Arab regimes, or none or all of the above.  The effect will be different for each country depending on the relative secularity/non-secularity of the population and the rebels, as well as the nature of the revolution.  In Yemen, for example, there was general agreement that a slow transition away from the old regime would be better than a radical regime change that could result in Islamists taking control of the country.  But during Ramadan that feeling could change, since Muslims will be staying awake every night for prayers and social gatherings, which could rekindle their fighting spirit.

Overall, there’s just no telling what’s going to happen in August.  There are too many players and too much uncertainty for anyone to make any definitive prediction.  Every argument has its valid points.  Something will happen, be it stalemate, truce, rebellion, or cease-fire, but what?  All we can do is wait and see.  Whatever happens, the US is going to have to make some decisions about whether or not to give aid, and what form that aid will take: troops, money, bombers?