The president of Myanmar (formerly Burma) announced an interesting way to fight poverty and increase economic development in the countryside: a sustainable microfinance system.  Microfinance, for those of you that don’t know, is a system in 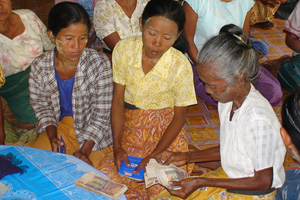 which low-income clients and others who do not have access to banking services are given loans with the assumption that they will be able to lift themselves out of poverty if they have access to small loans.  Think Kiva.  The United Nations Development Programme (UNDP) introduced a microfinance program to Myanmar in 1997.  It was the first time that people in the countryside had access to financial services that did not require collateral, which the majority of them could not afford to put up.  Since then, microfinance has become a major part of the country’s economy, with over 85% of rural households relying on loans to meet basic needs.  It is estimated that the demand for loans in the countryside is between $340 million and $471 million a year—quite substantial!  And with about 26% of the country living below the poverty line, access to a sustainable microfinance system could do a lot to improve the economic situation in the country.

The UNDP established the microfinance project with three main goals:

The program was targeted mainly at women (something my colleague Sarah wrote about), people who did not own land, and other marginalized groups, as they were the ones that had the most difficulty getting loans under the current system.  In 1990, 7 years before the introduction of the microfinance program, a law was passed in Myanmar that prevented state-owned and privately-owned banks from lending money without collateral, which forced impoverished rural citizens to rely on friends and family, moneylenders, and pawn shops for loans (Udit wrote about a similar problem in China that could be solved with microfinance).  The interest for these unofficial loans could be anywhere from 10% to 600%, and so taking one was a heavy burden.  The law also damaged NGOs and other local organizations that relied on donations, as they did not have the real estate holdings or fixed deposit account needed to get a loan.

By introducing small (about $60) collateral-free loans with affordable interest (about 3% a month) the UNDP opened up a whole new avenue for economic development.  But so far it hasn’t been enough.  Though the microfinance sector is now booming in Myanmar, with lenders in 46 out of 330 townships, that is not enough to significantly reduce poverty, which is why President Thein Sein’s statement is so interesting.  It has been estimated that only 10% of the country’s lending needs have been met, and so establishing rules and regulations could strengthen microlending institutions and allow to reach the rest of the country. That could go a long way towards reducing poverty.

If creating a sustainable and regulated microfinancing system does significantly reduce poverty in Myanmar, and there is evidence that microfinance can help economic growth and development, then there is no reason why the new system could not be implemented in other parts of the world (Cynthia wrote about some ways to implement a microsavings program).  If microloans can help the people of Myanmar, why could they not help people in Ethiopia? In Brazil?  Even in Michigan?  Of course, there are always issues to work out before establishing a new system.  For one, it is important to ensure that the loans are just that: loans, not handouts or donations, which can slow down economic development in the long run.  Also, the system would have to be tailored to each community, with group loans in some places and individual loans in others, and so on.  But if they are given in the right way, microfinance loans can stimulate entrepreneurship among low-income people and encourage small-business growth.  Because of this, microfinance can be employed as a useful measure in all countries, especially if the microlenders are subject to a legal framework, which will hopefully strengthen the institutions and make them more sustainable.