It seems that the revolutionary spirit of the Arab Spring has spread from North Africa and the Middle East all the way to troubled Belarus in Eastern Europe.  Belarus has been called “Europe’s Last Dictatorship” ever since 1994, when the “Last Dictator” Alexander Lukashenko came to power in a highly contested election.  In a distinct parallel to the governments of Libya and Syria and the other countries of the Arab Spring, the government of Belarus has spent the last 17 years jailing opposition leaders, rounding up protesters, banning “dangerous” books, and attacking journalists.  The economy has collapsed.  Inflation is rising.  And in another distinct parallel to the Arab Spring, the Belarusian people are fed up with Lukashenko’s oppressive regime and the problems he has caused and they are taking a stand.

Lukashenko, like Gaddafi and Mubarak before him, is not taking these protests sitting down.  In the past week alone he jailed over 250 people (some estimates are as high as 400) after a silent protest in Minsk, and before that he used a mixture of preventative arrests and internet attacks to attempt to stop the clapping protests planned for 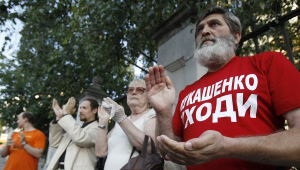 But Belarusians are not threatened by Lukashenko’s crackdowns and military rhetoric (he recently compared the current troubles to the Nazi invasion).  Activists have taken to the streets, and they’ve been using social media to plan their protests, inspired by the Arab Spring.  However, as you may recall from my very first post, I hesitate to give Facebook and other social media sites too much credit for the recent revolutions in North Africa/the Middle East—and the same applies to Belarus.  Social media sites may make gatherings like the clapping protests easier, may help activists coordinate times and places and methods of revolt, but in today’s technologically advanced world what else can you expect?  Activists are not going to arrange meetings by mail.  Social media has become a part of our lives, especially for the younger generations, and so to use it for revolution seems as natural as to use it for party planning or coordinating an event like the Rally to Restore Sanity.

I would say that the inspiring part of the Arab Spring, the lesson that Belarusian protesters should take from the events, is the persistence the protesters showed—though I suppose the same can be said of any successful revolution.  The activists and protesters who led the revolutions in North Africa were willing to give up everything for their cause, and they were not stopped by government crackdowns or threats.  They were fed up with their conditions, and they did something about it.

The people of Belarus certainly have plenty to be fed up with.  Despite numerous “elections,” Lukashenko has remained in power for almost 2 decades, and he appears to be grooming his young son to take over.  He caused the economic collapse by printing more money, and because of the following inflation, half of the Belarusians can barely afford to feed their families.  Peaceful protests are violently shut down by police, known activists jailed, and it has been reported that people’s Twitter ID’s are being stolen and used to report false information.  So while social media may play an integral role in the planning of revolutions and the spread of information, I think true inspiration comes from the knowledge that others facing similar, if not worse, circumstances, have held their ground and worked to bring about change.  The revolutions may not be over, or even close to over, but the willingness of the protesters to fight for the rights they felt they deserved in the face of powerful dictators is the real message of the Arab Spring, not the fact that they used such-and-such social media site to do so.