First of all, I’d like to thank all of you who took the time to give me feedback on my recent post on suicide. Whether you commented on the article on this site, tweeted me about it, retweeted it to your followers, or talked to me about in person, your actions meant a lot to me. I am new to blogging, and I was worried nobody cared about what I had to say. I am ecstatic that my writing seems to be reaching many people and promoting important discussions among many of you.

While all of your feedback has been valuable, one particular comment stood out to me. Angelita commented on my post:

“Great article. Ya know, I never realized how dangerous depression could be, at any age. I just lost my husband to suicide on May 19, 2011. I never thought he was as sick as he was inside. He was 36 years old. I have so many emotions about the whole thing. But I never wanted to ever have to remember him-the last time-hanging in the garage. I am very greatful to websites like this one. I am not the only one. Thanks again!”

The last line in your comment had a particularly profound effect on me. Your comment reminded me that, sadly, you are not alone. Many people in the world have to cope with losing a loved one to suicide. Yet, because of the taboo that has been put on talking about suicide in our society, many people deal with their grief alone. If just reading my previous article provided you comfort by reminding you that other people are going through a similarly terrible time, imagine how helpful it could be to share experiences with other people who have gone through the same type of grief?

As I mentioned in that post, the grief that a suicide survivor (someone who has lost someone he/she cares deeply about to suicide) must deal with is deep and unique. Some grievers cannot overcome the blame that they needlessly put upon themselves, and others cannot overcome their bewilderment or anger that their loved one has committed suicide. We invest a lot of time and money in suicide prevention. But the truth is, it is unlikely that we will ever be able to completely eradicate depression or suicide. Since complete eradication is unlikely, there will continue to be more suicide survivors. A 2001 study published that every suicide intimately affects at least six people. Because the issues that these survivors must deal with are so unique, they are susceptible to depression and suicidal thoughts. Thus, investments must be made in getting these lives back on track.

Because of the stigma associated with suicide, some people never seek the help needed to properly overcome their grief. Rather than confronting it, they often suppress it. I do not think suppressing grief is healthy or viable in the long-run. While I have not directly seen the effect of suicide survivors ignoring their grief, I have seen the impact of people ignoring trauma in their lives, and I think the scenarios are analogous.

Last summer, I worked in Belfast and interned at the organization Healing Through Remembering (HTR). This organization aims to help people come to terms with the past so that they can move on with their future. Throughout the better part of the last three decades of the 20th century, Northern Ireland was in a state of civil war. Protestant and Catholic families were torn apart by the violence of sectarian paramilitary groups. Almost everyone lost a close friend or family member during the Troubles. All of Northern Ireland was paralyzed by a state of fear. Anybody could have been involved in the violence – a mailman, bus driver, or even sixteen-year-old schoolboy. Because of the uncertain nature of the violence, there was a taboo on talking about it. One of the prominent slogans in Northern Ireland was “Whatever you say, say nothing.” You were not supposed to talk about the violence, grief, or trauma.

Though there have been occasional outbursts of unrest in the past 13 years (including this past week’s widespread rioting in Belfast), for the most part, the violence subsided in 1998 when the Good Friday Agreement was signed. In spite of this long-standing and relatively stable peace, organizations such as Healing Through Remembering are still needed. I attribute this to the fact that people were not able to confront their grief when their families were torn apart and their loved ones died. As a result, they were unable to overcome their grief and move on with their lives more quickly. HTR has been working to change the unofficial slogan in Northern Ireland to “Whatever you say, say something.” They have acknowledged that people cannot pretend that the past did not occur. Rather, they need the courage to face their trauma head-on to heal properly.

The impediments to healing that I saw in Northern Ireland are similar to obstacles for suicide survivors. Because of the stigma associated with suicide, many suicide survivors also evade confronting their grief or seeking support. This is a problem that must be eliminated. For this problem to be overcome, suicide survivors should be aware of their avenues of support.

There are many ways suicide survivors can confront and chip away at this grief. They can open up to their friends and family members to vent their sadness, anger, or other feelings. They can seek professional help in the form of grief counselors or psychiatrists. But, as Angelita’s comment suggested to me, perhaps the best way for 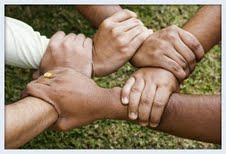 people to confront their grief is to seek support from people who have undergone similar experiences. Such a framework of support is already in place. The American Foundation for Suicide Prevention has compiled a directory of Survivors of Suicide Support Groups. Here, people are able to connect over the commonality of their experiences and often help each other.  I acknowledge that such support groups might not be right for everyone. However, Angelita, if you, or any other suicide survivors reading this article are searching for people you can relate to you, I urge you to look into joining a local support group.