The Over Sexual Image of Young Girls

Growing up is difficult enough without having to see images depicting young women in provocative or sexualized positions.  However, young girls across America are immersed in a media culture in which wearing skimpy outfits make them beautiful, and looking like a size two model is the epitome of beauty.  Everything from magazines to television shows portray an image of females who are edgier and sexier, a message that 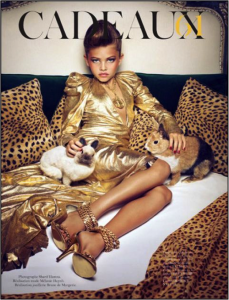 becomes embedded in the minds of millions of young girls who watch TV or even pick up a Barbie doll.  Unfortunately, this message is dangerous for the mental and physical health of young women who are told what being beautiful is supposed to look like in today’s society.

According to the American Psychological Association (APA), society, parents, and even fellow girls aid in the sexualization of young women.  For example, girls’ toys are often dressed in miniskirts and fishnet stockings with their faces painted with makeup, making it seem as though this is acceptable everyday attire.  Though the clothing or marketing of the dolls may not affect the girls immediately, the idea of mimicking the dress and mannerisms of the dolls can manifest as girls get older.  For example, they may begin to think that wearing makeup is preferable to being naturally pretty or wearing shorter shorts or dresses is the only way to attract attention.  Studies have shown that girls between the ages of 8 and 12 spend over $40 million a month on cosmetics alone. Recent polls have shown that 25% of teenage girls post nude or scantily clad pictures of themselves on the web.  The over sexualized image of girls throughout the media can easily affect the way girls think of their bodies and themselves as they grow older.

Unfortunately, the media is not the only player in influencing the behavior or decision making of young girls.  When young girls ask their parents to buy them products, toys or clothes that amplify their sexuality, the adults are inadvertently supporting the overly sexual image these items project.  Any girl who is not dressed in the same sexualized clothes as her female peers or playing with the same dolls and toys is usually treated as an outsider or black sheep by other girls.  The pressure to fit in and be like everyone else can be incredibly overwhelming, and can cause young girls to pick up toys and begin to dress like their friends merely to feel “normal.”  This becomes a vicious cycle that young girls have difficulty escaping when the media and their peers all make them feel as though being different is strange.

The dangers of the over-sexualization of females translate into all aspects of a young girl’s life.  Lyn Mikel Brown, a professor and co-founder of the non-profit organization Hardy Girls Healthy Women, states that society’s sexualized image of girls causes them to think that the road to becoming an adult requires them to look more sensual and seductive.  Many girls, who idolize celebrities like Miley Cyrus and Lindsay Lohan, see a transformation to adulthood that starts off sweet and ends up sultry.  Young girls begin to think that the only way to be viewed as a grown up is to put on sexy clothing and pounds of makeup.  Furthermore, a majority of the images young girls are exposed to are of tall and toothpick thin women, a narrow physical body type that can be difficult to attain.  When girls feel like they cannot achieve the body type or sexual perfection that media dictates, they usually fall down a slippery slope of body and confidence issues.  Research from the APA’s Task Force on the Sexualization of Girls connects the over sexualization of young girls with problems like eating disorders, depression, and lower self-esteem.  All in all, the sexualized representations of girls in magazines, movies, and shows force them to think of themselves in demeaning ways.

Fortunately, there are a plethora of organizations that have become involved in spreading the message of the over sexualization of young girls today.  Organizations like the Respect Institute and Sexualization Protest: Action, Resistance Knowledge (SPARK) have come up with several ways to combat the image of over sexual girls.  Both organizations offer tips to boost the self-esteem of girls, promote healthy images, and gain confidence in order to reject the media’s picture of one size sexualized girls.  By becoming involved and learning more about how we can empower young girls to feel comfortable in their own skins, we can all take part in making an important difference.

Areeba Hasan is a SISGI Group Intern working with the Alliance for Positive Youth Development, a SISGI Group initiative. She is currently a senior at Rutgers University New Brunswick, with a major in history. To learn more about the SISGI Group’s Youth Initiative please visit sisgigroup.org