Almost two weeks ago, Richard Goldstone, a prominent and well respected former South African judge, wrote an op-ed for the Washington Post in which he retracted some of the key findings of the Goldstone Report from 2009. The Goldstone Report, 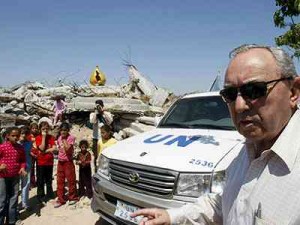 The findings of the report were, generally, that both sides had possibly intentionally targeted civilians and committed war crimes. The report, upon its release, was simultaneously lauded and criticized. Israel and the United States called the report one-sided, focusing almost exclusively on Israel and showing a heavy bias in favor of Hamas.

In the op-ed, Goldstone, who was only a co-author of the report, retracted his position that Israel had intentionally targeted civilians, and thus committed any warcrimes, while maintaining that Hamas was still guilty. Goldstone points to a followup report by Judge Mary McGowan Davis, which showed that significant effort had been made by the Israeli government to hold accountable those responsible for the crimes committed. Goldstone still laments the lack of support the Israeli government showed in the creation of the report, and believes that to be a key problem with its accuracy. Israel reacted immediately and very positively to the retraction, inviting Goldstone to tour Israel, after years of leading a campaign against Goldstone to the point where he was almost not allowed to attend his grandson’s bar mitzvah in South Africa.

Roger Cohen’s op-ed in the New York Times a week after the Goldstone article nicely summarizes the other prominent response: one of incredulity and wariness. Cohen writes that he, too, read the follow up report written by Judge Davis and found it to say quite the opposite about Israel. According to his interpretation, the report details the slow, inefficient way in which Israel is carrying out its investigations, as well as its extreme lack of transparency and willingness to cooperate with the UN fact finding mission. Cohen also notes the extreme political pressure that Goldstone has been under from Israel and the US to dismiss the findings of the report, and believes it is possible that the aging Goldstone finally caved in after two years.

It is undoubtedly true that Hamas has been provoking Israel for quite some time with constant missile attacks and the targeting of civilian populations, which constitutes a war crime. But, looking at the casualties from the Gaza War, it is hard to imagine that Israel was not responsible for its own atrocities when over half of the casualties were noncombatants. And, when Israel refuses to cooperate with the UN fact finders, especially when one of those fact finders is a well-respected Jewish jurist with no bias against the state, warcrimes can only be assumed without evidence to the contrary. The reaction of the entire international community to Richard Goldstone’s report and his retraction has been pretty appalling, and I believe it stands as a testament to the power that politically motivated personal attacks can have on international policy.