Yesterday, US Attorney General Eric Holder made a statement declaring that Khalid Sheikh Mohammed, the mastermind of the 9/11 attacks, will be tried by a military tribunal in the Guantanamo Bay detention camp. Although somewhat inevitable, it comes as a disappointment for those who supported President Obama’s original plan to transport the Guantanamo detainees to the US for trial. 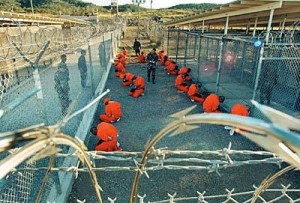 A bit of background: The Guantanamo Bay detention camp (Gitmo for short), is a US military holding facility located in Cuba and established in 2002 for enemy combatants captured in Afghanistan and Iraq. Since its creation, Gitmo has been the target of innumerable protests and criticisms, ranging from allegations of torture to the weakening of the international human rights framework. Many of the detainees at Gitmo have been incarcerated since the camp was opened, without having been tried and proven guilty.

Congress has been adamantly opposed to Obama’s position, and has blocked the funding necessary for closing the camp, as well as for the transfer of Gitmo detainees both to other countries and to the Untied States for trial, forcing the hand of the Attorney General to proceed with military tribunals.

Gitmo is an affront to justice, both domestic and international. Not only does it severely undermine the power of the Geneva Conventions by barely allowing the detainees any rights as prisoners of war, but the extra-judicial, quasi-legitimate nature of the entire operation, screened from criticism, is unacceptable. The Red Cross wasn’t allowed to investigate until 2004, and when its report detailing torture was leaked to the public, the United States rejected it.

The Obama administration was seeking to inject some new justice into the proceedings at Gitmo by allowing the detainees the right to a fair trial on American soil, but that has now become impossible, and the only option remaining is military tribunal. This entire situation smacks of hypocrisy and eye-for-eye politics. Terrorists, acting individually and not as a part of any state or military, attacked the United States in what came to be considered an act of war. The United States has refused to treat them as prisoners of war, with all of the rights that go along with that as laid down by the Geneva Conventions. Instead of combatting terrorism with justice and taking the moral high ground, which it could so easily do, the US is instead abusing its prisoners, assuming guilt and incarcerating them for years without trial with no hope of release and opaque tribunals.

The US needs to assume responsibility for its actions, and as the paragon of democracy and equality it claims to be, the US cannot dismiss the rights it holds sacred when it comes to fair trials, even for prisoner combatants held off of US soil.