Ever since the US House of Representatives became a Republican majority two months ago, the House, along with many state legislatures, have been churning out legislation targeted at limiting women’s rights, redefining victims of sexual assault and placing the lives of fetuses above their mother’s.

There are currently three initiatives against abortion at the Federal level. The No 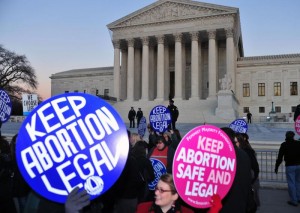 Taxpayer Funding for Abortion Act is pretty self-explanatory. Originally included in the language of the act, but later removed thanks to the strong outcry of feminists and activists, was a qualification of “rape” to “forcible rape,” a politically motivated change that begs the question of what makes rape forcible.

Also coming from the House is the Protect Life Act. This Act allows hospitals and doctors to deny life-saving abortions to women on religious or moral grounds. This is in direct contradiction to the Hippocratic Oath, which requires doctors to do everything they can “for the benefit of the sick,” and makes no exceptions for religious or moral qualms.

Thirdly is the Title X Abortion Provider Prohibition Act. This would amend Title X of the Public Health Service Act, which provides funding for family planning services, to no longer provide any family planning funding to clinics that also provide abortion services. Currently, Title X funds already do not go towards abortions because of the health care reform legislation passed last year, so this act will further limit the funding the providers receive for non-abortion related services (for instance, Planned Parenthood also provides cancer screenings, contraception, and std testing and treatments in addition to abortions). For more information about this see our post from last week Beyond Abortion. This legislation will most adversely affect low-income women who depend on free family planning services to prevent unwanted pregnancies.

Things are as bad, if not worse at the state level. In Utah, legislators passed a bill that could theoretically criminalize any behavior seen as potentially causing miscarriages. Upwards of 20 states have legislation in the works to require mandatory ultrasounds for women seeking an abortion. In South Dakota, recent legislation would expand the definition of “justifiable homicide” to include killing in the defense of a fetus, which could theoretically allow for the killing of a doctor providing an abortion, or even the killing of a mother in the attempt to save a fetus inside of her.

In Georgia, Republican Bobby Franklin has introduced two extremely detrimental pieces of legislation. The first would criminalize any behavior that causes miscarriages, and would require that all miscarriages be federally investigated. If it is found that the woman intentionally caused the miscarriage, the crime could be punishable up to the death penalty. Included in the bill is the understanding that “The General Assembly knows the answer to [the difficult question of when life begins], and that answer is life begins at the moment of conception.” The second redefines victims of sexual assault as “accusers,” saying that criminal conviction should take place before a victim is defined as such.

With their first two months in power, the Republicans in the House of Representatives have chosen to target a woman’s right to choose instead of the numerous other pressing national and international concerns our government is facing, including the budget crisis and unrest in the Middle East. With the livelihoods of poor women in the balance, and an attack on women’s reproductive rights that has not been seen in such strength since the 1970’s, Republicans are seeking to undo forty years of progress. If you are interested in becoming active in contacting your representatives about this legislation, join the National Organization for Women or Human Rights Watch mailing lists and watch for updates as the fight in Congress continues.