A person can be half-French and half-Italian, and simultaneously a citizen of two countries. Yet, it is awfully complicated to be half- Christian and half-Jewish when it comes to religion. A distinction has to be made; one is either a Christian or a Jew. It is difficult to partially identify with such distinct religious identities. When parents with 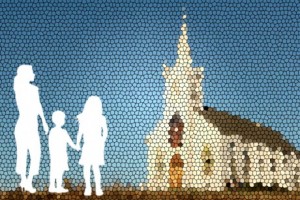 distinctive religious identities, such as Christianity and Judaism have a child; conflicts can arise. Conflict occurs due to the historical differences in both religions; different beliefs, rituals and values. The way in which each parent identifies with their religion, and the most important aspect that “each parent wants the child to identity  with them.”
The relationship between people who are of different faiths may be perfectly “fine” before a child arrives. They may not have contemplated religion being an issue. However, the birth of a child changes that perspective. Each parent’s historical and cultural identification with their religion often begins to rear its head. It is not just the “religion ” itself that is the conflict. It is the parents need to have the child relate to their religion, as it becomes a symbol of identification, from either parent. With both parents being insistent on their religious identification, they can become extreme on the issue. This may cause future conflict with the child. He or she may learn not to be tolerant with various religions due to the extreme experience within their own family.

Rituals such as baptisms and circumcisions, or holidays such as Christmas, Hanukkah, and Easter can create unexpected conflicts in otherwise happy households. Which holiday should the child recognize, celebrate or accept? The holidays can become a time of dread for a child caught in the middle of parents; determined to instill the “right” religious practice.

How do we get pass the conflicts?
First and foremost we need to get past ourselves. Yes, it is great to see our child choose our particular faith. But in 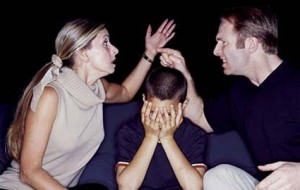 order to accomplish this, is one willing to alienate the other parent and possibly destroy the family? I would hope not! Instead why not focus on the values and teachings of the religion. In Christianity and Judaism for example, the common message in both religions is kindness, love and respect for all. Parents can avoid conflict by teaching their child the values and peace ethics of both religions. This will allow the child to accept both religions in some context.
The issue of the holidays can be easily solved by intermingling the faiths. Why not celebrate all the holidays. I have yet to meet a child who does not love the gifts that comes with major holiday celebrations. Children in a household with distinctive religious holidays will experience and learn twice the joys of giving and receiving.

The most important takeaway in households with parents having distinctive religious identities is the opportunity to teach tolerance and respect for others. This is their opportunity to educate and show their children that people with 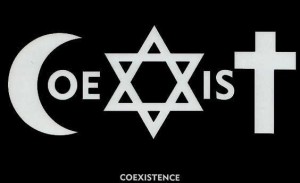 distinctive differences can coexist, without conflict. Parents can ingrain in their children from a tender age the lesson of learning about other faiths, culture, and practices, and not denying someone based on the ignorance of not knowing. Children who are taught these life lessons can go on to become socially responsible human beings. They are less likely to engage in discrimination, and stereotypical prejudices and intolerance of others.
The path parents take in these situations is central to their child’s development as a socially responsible human being. It is less important to spend time focused on denying, one faith over another. Therefore, parents have to decide which role they wish to play in these circumstances. Do they remain focused on “themselves” and what they want, or do they use this as an opportunity to shape their children’s perception of difference and tolerance of diversity, a much needed social skill in our society today.