It’s an election year again. Which means you, just like me, have been getting bombarded with press releases, flyers, news articles, debates, and more information than you could ever possibly require about this round of candidates. Sure, this can be irritating at times, but it’s what you’ve come to expect this time of year and it can be useful. So you take what information you want and start thinking about who you’re going to vote for in November. But what if you couldn’t? What if you had to receive all this material and see all the advertisements about voting but you weren’t allowed to? That is the reality that 5.3 million adults face in the United States. Convicted felons who have lost their right to vote. With their conviction, they lost one of the most crucial aspects of citizenship in this country. And quite frankly I 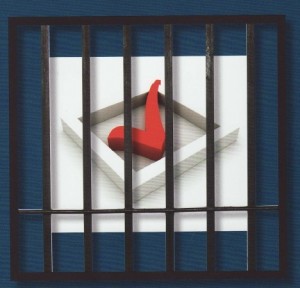 think that’s wrong. As a democratic nation, the United States shouldn’t be able to pick and choose who should have the right to vote.

Before I continue, let me clarify, voter eligibility is determined on a state by state basis, it’s not an overarching standard within the country. But generally speaking convicted felons can’t vote while they’re in jail and they can’t vote while they’re on parole. They can maybe vote once they finish serving their sentence. But even if they do regain their eligibility, they almost never actually get to exercise that right. The amount of red tape and hurdles they have to jump through make it all but impossible for that to happen, except in a few select states. For example, a man in Iowa, who was convicted of felony robbery as a teenager, tried to regain his right to vote later in life. He followed all the procedures and even went so far as to hire a lawyer to assist him with the process. But he was STILL denied because he and his lawyer hadn’t submitted all the necessary, but complicated, paperwork properly. This is just one example of many of people trying to get their rights back and being denied. So for a majority of people, once you’re convicted of a felony you won’t be voting again.

Now, I know there are a lot of people out there who agree with current laws and don’t think convicted felons should have the right to vote. They say felons are bad people, they’re criminals. They ask if I would really want a mass murderer voting in an election. But lots of crimes result in felony convictions, not just the heinous ones we read about in the paper. Vandalism, theft, distribution of drugs can all also result lead to a felony conviction. Are these also “bad people”? Even if you think yes and there’s no way you’d support the way they voted, one person couldn’t decide the election results on their own. There aren’t even enough convicted felons to “block vote” in favor of a particular candidate. And that’s assuming that all convicted felons would even vote for the same person (according to studies, it’s highly unlikely that they would). Which means there’s no danger that they would negatively impact the results and elect someone a majority of the public didn’t approve of.

But I think something more important is at stake than even election results when we deny certain people the ability to vote. Our country is founded on democracy. It’s what set us apart when we first became a nation, it’s something we pride ourselves on, and it’s something we work to spread around the world. But how can we consider ourselves a true democracy when certain members of our society don’t have the right to vote? Is punishing these people or protecting the outcome of particular elections worth sacrificing one of the central tenets of our country? What’s really more important to you: keeping certain people from voting or protecting the integrity of our entire system?