As stated in the 2012 version of the Index of Women’s Economic Opportunity, “women are the key driver of economic growth.” Research has shown that in the United States alone, women have added 2 percentage points per year to the overall economic growth. Similar or even better numbers have been seen in numerous countries all around the world. These studies only account for women in developed countries. However, the 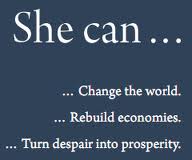 same improvements can be seen in developing countries with education and empowerment for every single female.  Tapping into the most prominent unused workforce in the world would have undoubtedly huge, positive impacts on the global economy.

Unfortunately, about half of all women whom are old enough to pursue jobs and careers are not contributing to the world’s economy. At the same time, though, the poorest countries in the world see more female labor than those that are prosperous and productive. So why does poverty persist in so many countries with female workers? The problem is with access to resources. Women and men may both work in agriculture, but while men have the tools and resources necessary to save labor and increase output, women do not. Essentially, women are working harder and longer to produce the same results as men. If female workers had access to resources, education, and various legal necessities, these issues would not remain prevalent.

The Women’s Economic Opportunity Index, or WEO, takes data from numerous international organizations and research to realize the underlying reasons as to why women’s access to economic opportunity varies around the world. Each year since 2010, the WEO has shown its results and evaluations on female economic participation in 128 countries.

At the top of the WEO’s 2012 list for countries with the most economic opportunity for women is Sweden; at the bottom, Sudan. The United States is number 14, falling just behind the United Kingdom. In Sub Saharan Africa, the female labor participation rate is 61%, which seems fairly high. The problem is that most of this work is low value due to the fact that women in this part of the world cannot own land, and their education opportunities are highly limited. The Middle East and North Africa have significant problems as well. The presence of high reproductive rates and hugely restricted access to education keeps women at home with the family instead of at work and contributing to the economy. What’s more, women are not allowed to travel, work, or open a bank account without a male’s permission in many countries in this part of the world. Not surprisingly, the female labor force is extremely low in this region. The Americas see an obvious high rate of women in the labor force, which is a direct result from their open access to education, their political participation, and their laws protecting women. Western Europe sees similar opportunity, if not better. In Eastern Europe and Central Asia, women are held back by laws that specify, to an extent, which jobs they can and cannot have. For example, in Moldova, females cannot take part in many jobs that require any significant amount of weight to be lifted, such as brick laying or welding.

Sweden, who holds the number one ranking, should be a model for others. Protection of women’s rights is a key aspect of Sweden’s government; there are equal opportunity and rights for all. In addition, the country also advocates for the same practices to be implemented worldwide. Gender equality holds a prominent role in all social aspects as well. Pluses like required availability 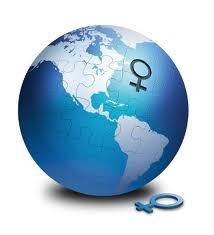 of day care for children whose parents work or study, costing 1-3% of the household income, display the work that Sweden has put into achieving gender equality. Norway, at number 2 on the list, is home to some of the most highly educated women in the world. Finland, number 3, also delivers full and low cost child care. Moreover, they are known to provide education and training to women in business, more so than most other countries. Women are also given job security here with the right to mandated maternity benefits.

Access to training and education, finance, legal and social status, among others, are what have been shown to promote the female labor force in high scoring countries. Low scorers and even those falling below the top ten should take a detailed and critical look at the three highest ranking countries. Even inclusions like increased access to and use of contraceptives has made Sweden, Finland, and Norway the leaders of the pack. The United States alone is already taking steps backward with the fight against Planned Parenthood, in regards to contraceptive availability. If more countries used these three as their models, female equality and inclusion in economic development would potentially see a huge increase. Education needs to be opened up to females everywhere; this is the first step that should be taken. With the right training and knowledge, everyone in the world, both male and female, would benefit. Laws need to be put in place that require child care and maternity benefits for all women; there should be no fear that being or becoming a mother will threaten a woman’s job or career. Additionally, contraceptive availability and use needs to be implemented and promoted in every community around the world. On top of everything, each of these best practices should not stop at the country’s borders. Each nation should take it upon themselves to advocate for these rights in lesser developed regions.

Realization that these steps and changes will create a better world for all has come to some countries, but is still far down the road for others. The WEO is a great way to see clear and positive results on how improving our global economy can become a reality.