Something I could never understand were the cries of neighborhood residents who honestly complained about the look of the new solar panels on their lampposts.  To me, the micro solar energy catchers are an exciting, smart new way to bring energy needs to local communities.  So I have never quite understood how people could find grounds to complain about them based on visual aesthetics.  Maybe solar panels out-shadowing white picket fences is bordering offensive for some folks, but to others, the concept of new, renewable energy sources means challenging their entire belief system.  For native Hawaiians, the state’s new Big Wind plan brings a battle for preserving a cultural resource that they believe to be rightfully theirs, not to be shared.

Hawaii has been facing an extreme energy crisis, as it is dependent on oil imported daily on an ongoing stream of tankers.  In 2008, Governor Linda Lingle started the bold push for energy independence.  The Clean Energy Initiative hopes to set Hawaii on a path to sustainable and environmentally responsible energy sources.  By 2030, Hawaii aims to produce 70% of its energy from renewable sources.  The initiative promises to ban the opening of any new coal-fired plants within the state.  The initiative looks to solar power and bio-fuels as viable options to end the use of dirty energy. To help meet the law, wind power has become a major strategy for clean 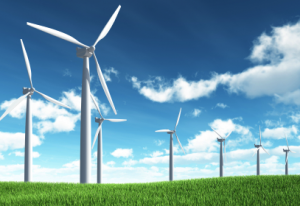 Big Wind became the name for this very strategy.  With the projected generation of 400 megawatts of energy, Big Wind would be the most wide-scale push to move the populated island of Oahu from oil dependency.  The Big Wind project would place wind generators not only on Oahu itself, but also on neighboring Lanai and Molokai island where the climate is windy and suited for wind power.  With over one million residents, Oahu has a huge base of energy needs.  In order to bring those needs to the population, an undersea tunnel would transport the energy generated on Lanai and Molokai to Oahu.

The transfer of energy has created some intense debates.  One of these debates stems from the idea that Oahu people are “energy gluttons” and that they are demanding too much energy without providing it themselves.  Some have proposed to generate the energy in Oahu through an extensive solar panel investment instead of exploiting the resources of Lanai and Molokai to support a different island’s population.  This critique is met with the opposing argument that Hawaii is one state and that all Hawaiians share the same resources.

A separate and more challenging argument that is hard to counter is the natural belief by some native Hawaiians that wind holds a stronger, spiritual role in their culture and its power cannot be exploited for consumer gains.  These claims to “ownership” of wind create a serious block in the state’s clean energy drive.  It is common to believe in air as a public good, something that is non-rival and non-excludable.  No one’s use of air prohibits another one’s use of air, and no one can be denied access to air.  It would be then to follow that wind would have the same categorization when considering public goods.

To some Hawaiians, wind is a cultural resource, not a commodity.  When the state aims to deal with the crisis of energy dependence they must consider the heritage and opinions of the people within their communities.  Many have tried to persuade this group of the many benefits wind production would have to their island, including job creation.   Additionally, the state has prepared incentive packages to residents who would be most affected by the construction of wind turbines.  Even considering the financial incentives, Hawaiian energy companies are still in debates with both islands about their plans.

What do you think the path for Hawaiian energy should be?  Do the cultural opinions of a minority outweigh the economic and environmental benefits for the majority?  As a policy maker or Hawaiian power holder, whose values do you choose to respect and at what costs?  These will be serious questions Hawaii will have to face if it hopes to reach its energy independence goal by 2030.