Honor killings are generally associated with cultures that treat women with contempt. These cultures see females as objects that can be owned, sold, and handled in whatever way is deemed appropriate by a male. When a woman commits an act that traditionally “brings shame” to a family or community, she is killed. More often than 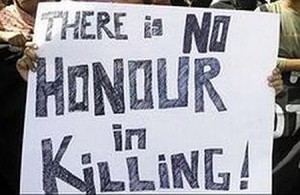 not, she is killed in a horrendously brutal way; think hangings, rat poison, and stabbings, for instance.

Actions that might seem trivial to some are considered life-ending for others. For example, in several areas of the world, women are murdered for refusing to enter an arranged marriage, being a victim of sexual assault, seeking divorce, marrying without an elder’s permission, committing adultery or being accused of adultery, and homosexuality, among others. You get the idea. If a women does something wrong, she has brought shame on her family, and is thus put to death.

The United Nations Population Fund has estimated that at least 5,000 women and girls are killed each year by members of their own family. However, many believe this approximation to be greatly miscalculated. In an effort to escape attention for committing an honor killing, many families will report that their daughters or wives have gone missing or committed suicide. With this being the case, it is almost impossible to find an exact number of honor killings that are committed per year.

Compared to the other pressing issues that our world constantly strives to deal with and resolve, honor killings are actions that consistently receive rudimentary attention not only from organizations, but from governments as well. The reason for this, though, is not due to the turning of a blind eye; the problem is culture. Embedded into numerous cultures is the perceived fact that honor killings are a perfectly acceptable means of shedding the shame that a person has brought upon a family.

Judges, police, other legal officials, men, and even female victims have been ingrained with the idea that honor killings are simply a part of life. The HBO series “Love Crimes of Kabul” cringingly reveals how Afghan women, who have simply been accused of adultery (even after being medically examined and claimed as virgins), are sentenced years in jail. Extremely eye opening were the interviews with these women where they openly agreed that they deserved to be punished for their actions.

As hard as it is to imagine, about 77% of honor killings in Pakistan alone end with the acquittal of the criminal. A court’s lack of information, a lack of consolidated data, and a reluctance of people to give information about the incident typically leads to the criminal being set free, and the victim ending up either in jail, or dead.

The question is how do we put an end to honor killings?

Since culture is a huge aspect in this issue, the grounds are difficult to tread upon. Some activists propose setting up women’s shelters in areas where honor killings are routinely committed. The problem I see with this is that shelters do not provide a sustainable solution. Even if there were enough shelters to provide housing for the amount of women who need them, which there are not, where do these victims go afterwards? They cannot return home; their family’s shame will not dissipate over time. They cannot move away and start a life of their own; they are rarely educated and receive no financial income of their own. And how will their children grow up in a shelter? And what happens when the government does not provide security for the shelters? In some cases, women are only allowed to take advantage of what little comfort the shelters provide for up to three months. The problems are numerous and obvious.

Turkey came up with a plan to dissolve the happenings of honor crimes within the country. A national campaign was launched to raise awareness of the issue, where people were reached through billboard ads, fliers, television commercials, and radio broadcasts. National celebrities were used as the campaign’s face in order to garner support from the public. The main directive in this action was to educate the public about why honor killings are wrong, and why they have to stop.

While the success of the program is not yet found, I believe that education is what makes this campaign stand out. I stand strong with the idea that education is the key to progression. Showing people that women can serve a purpose other than providing labor or helping a family obtain a bride price is something that many have never even imagined.

While this method would take time to permanently implement itself into the culture, it might be the best first step to take. Not only do families need to be educated about the issue of honor killings, but judges and police have to be better informed in order to impact the legal aspect of the problem as well. As minds slowly start to change, the amount of unnecessary deaths will gradually decline.

With the topic of honor killings being so hesitant to approach, it is difficult to come up with an immediate solution. Do you think that Turkey’s approach, with its soft but definite impact, is a smart way to handle the problem? If not, what might be a better solution?