All Eyes on Eritrea

In dictionary terms, the word “faggot” refers to a bundle of sticks used for kindling. While this might be common knowledge for some, one believed origin of the term probably isn’t.

Faggots were used to stimulate fires during Europe’s Inquisition period. These fires are generally associated with the burning of heretics, but among them were countless gays. In fact, homosexual men were sought out and forced to carry the faggots that would soon be used to murder them. For this reason, homosexual males began being referred to as “faggots.”

In Albany, New York, an area that one might think of as being liberal, Erin Davies fell victim to a hate crime. The Art Education student at Sage College drove a Volkswagen Bug, adorned with a rainbow sticker on the rear window. She parked her car on a street near her apartment every night. In a hurry to get to school one morning, Erin approached her vehicle to find the words “fAg” and “U R Gay” in red spray paint on her driver’s side window and hood.

After calling the police and her insurance company, Erin was told that since her car was drivable, she would have to keep using it until the paint could be removed. They actually expected her to drive around, labeled as a fag, for everyone to see.  At first the thought was horrifying, but then a new idea dawned on Erin: why hide behind discrimination when she had the perfect opportunity to showcase the kind of hate that people were directing toward the LGBT community? Why not drive the spray painted car around for everyone to see?  And that is exactly what Erin did.

Starting in Albany, Erin drove around the country for almost two months, making stops in cities in both the North and South. She interviewed over 500 people in an attempt to understand their reactions as well as educate them. She spoke at numerous awareness events and participated in almost a dozen pride parades. People all over the country knew who Erin was when they saw her car. Some even tried to clean the paint off when she was away from it. People’s generosity was astounding, and other’s prejudice was heartbreaking. Erin received notes of kindness and support, but also a cement rock that shattered her rear windshield. She put her life in danger in order to show people that hate is a crime.

In taking a look at Erin’s attempt to spread awareness of what people are capable of and what goes on in our own neighborhoods, I had to step back and really think about whether or not what she did was effective. Does driving an obscene car around the country really make people less homophobic?

Potentially, I think it does. Erin caused an amazing ripple effect from her activism, which she showcased in her documentary of the story, called Fagbug. You can watch it 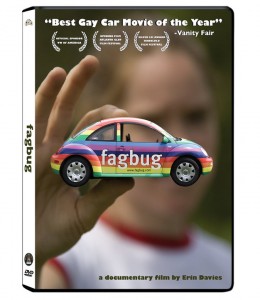 here http://topdocumentaryfilms.com/fagbug. She started with educating people about hate crimes and truly changed some minds about homosexuality. She garnered support from complete strangers, and even ended up being sponsored by Volkswagen. What’s more, the car company painted Erin’s bug in rainbow colors, put her website on the side, and have actually made plans to make the rainbow Volkswagen a regular option for buyers. More importantly, Erin inspired others to take a stand for what they believe is right. Two women from another college deeply admired Erin for what she was doing, and decided to start an organization of their own, dedicated to women’s rights.

Essentially, Erin’s effort did not go to waste. She not only made the public aware of hate crimes, but she showed others that they too can take a stand. While Erin alone did not change our country’s policies on homosexuality, as I stated before, her idea could potentially make a permanent impact. If everyone stepped out from behind the curtains of hate and showed the public that labeling someone is an uneducated and wasted effort, this kind of crime might actually dissipate. Hate crimes happen because people know they cause harm, but if these criminals realized that labeling someone wasn’t going to cause them to run and hide in a closet…they might actually stop.

Do you agree? Was Erin’s strategy something that could potentially put an end to hate crimes, or is there a better way to go about it?