The debate on the use of weapons is heated, personal and wide-ranging. As a conflict resolution student, I’d like to think that conflict can be resolved in other ways besides using deadly force. This particular blog doesn’t try to address the debate on whether weapons should be used or not. It accepts that in today’s society, the commonly accepted view is that at times to maintain peace; deadly force is necessary and has to be used. Also, that the use of weapons in war, in particular, is inevitable. And while the military procurement of arms and the legal manufacturing of weapons to sell domestically and abroad to others is very different from the use of weapons by gun runners and militia, there are consequences. No matter its legality, the repercussions of the sale of weapons is such that it is felt by society at every level and directly and indirectly affects members of much of the developing world.

Every gun that is made, every warship launched, every rocket fired signifies, in the final sense, a theft from those who hunger and are not fed, those who are cold and are not clothed. The world in arms is not spending money alone. It is spending the sweat of its laborers, the genius of its scientists, the hopes of its children… This is not a way of life at all, in any true sense. Under the cloud of threatening war, it is humanity hanging from a cross of iron — Former U.S. President, Dwight D. Eisenhower, in a speech on April 16, 1953.

Social problems around the globe abound not because of a lack of funding, but because of the scarce resources dedicated to address the issue. According to reports, some governments spend more on their military than on social development, communications infrastructure and health combined. Each year, approximately $50 billion USD worth of weapons are sold worldwide, with three quarters going to developing nations. What I found staggering is that 85% of all the arms sold between 2002 to 2009, were done by the 5 permanent members of the United Nations Security 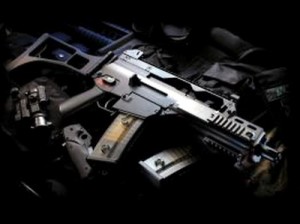 Council (the United States, Russia, France, United Kingdom and China), together with Germany and Italy. This is note-worthy as this UN body is tasked with ensuring peace globally and sanctioning rogue regimes. The sad truth is that in most of the developing world, these weapons are not used to promote peace by to inflict fear and maintain the status quo, which most times means a corrupt state.

Another huge problem with those countries providing the arms to the rest of the world is that there is no guarantee in whose hands they will end up. According to an Amnesty International report, the United States, Russia and several European nations provided the majority of the weapons used by oppressive governments in the Middle East and North African regions before this year’s Arab spring. They also found that in the last five years approximately $2 billion USD was spent on security equipment such as small arms, tear gas, and armored vehicles by Bahrain, Egypt, Libya, Syria and Yemen, five of the countries that faced or are facing uprisings.

While indirectly, arms trading promotes corruption and lack of accountability in how they will be used and by whom, directly, it is responsible for a high rate of deaths. The growing access to small arms, in particular, has been a major factor in the increase in the number of conflicts and fatalities worldwide. In today’s conflicts over 80 percent of all casualties have been civilian; 90 percent of those were caused by the use of small arms.

What’s called into question here is not to stop the manufacturing and selling of weapons, it is to recognize the implications beyond the amount of income their sale brings to a nation.

In 2009, 153 UN members voted on forming an arms trade treaty to address accountability issues and stop human rights abuses. The US and European Union have also developed some regulations, but they are not adequate, full of loopholes and lack transparency. In the end, I am left with one question: does the prospect of such large profits and gains, blind the governments to the plight of individuals who live in the perpetual unrest caused by weapons that have infiltrated their society?