This week I received an email about a program that was funded by USAID, the US federal government’s international development agency. I’ve read several in the past highlighting youth initiatives and other similar projects. What caught my attention about this one was the fact that it addressed controversial topics like child marriage.

The Youth Theater for Peace program in Tajikistan promotes conflict resolution in communities by using artistic methods to address taboo issues. Mediums like acting and theater are used to spark discussions among the youth. Then, they are responsible for taking back the information to their respective communities upon their return.

A perfect example of their success is the story of Faroiz Makhamova from Tajikistan in Central Asia. Here is an excerpt:

Last year, there were no girls enrolled past the 10th grade at Faroiz Makhamova’s high school in Chorku, Tajikistan. This year, there are 20. In Faroiz’s rural district, only 42 percent of girls continue their studies after the 9th grade. Many marry early and quit school to take on household responsibilities. Just a year ago, Faroiz, too, was preparing to get married. But when Faroiz was selected to take part in a summer camp held by the Youth Theater Peace program (YTP), she convinced her parents to delay her marriage until after the camp was over. Upon returning home, she insisted that her parents allow her to continue her studies and asked them to delay her marriage again until she could complete high school and then a university degree. Persuading her mother was easy, as she, too, had found it difficult to go through life without an education. Convincing her father was another story. “My father used to say it is a shame to let daughters go away to the capital city for school, says Faroiz. “But after I attended the camp, I can sit with my father and talk, which we hardly did before. We now discuss my participation in the performances and issues that we present. He has also become interested in my studies and achievements at school. I think he understands now that he made a good decision in letting me go to school and delaying my marriage.”

So, I decided to research this phenomenon of child brides and child marriages. I vaguely remembered some headlines, but never really fully delved into the issue. I was taken aback by some of the stories I read. For example, in Pakistan, a six-month-old baby was 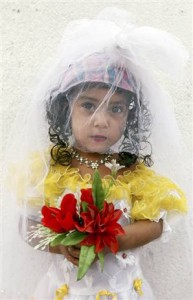 married to a twenty-five year-old man. In Yemen, Nujood Ali, a 10-year-old child bride, took her husband to court to obtain a divorce. What hit closer to home was that until 2008, the Fundamentalist Church of Jesus Christ of Latter Day Saints practiced child marriage. As soon as the girls were ready to bear children, they were married to much older men.

This area seemed black and white to me. As a human rights advocate, I found the practice disheartening and unjust to young children, who are forced to grow up too quickly. As I continued reading, I found that there were many other valid reasons why child marriages should be banned. Health practitioners list premature deaths, stillbirth, cervical cancer and sexually transmitted diseases as consequences of girls marrying too young. Education specialists cite that early marriage impedes girls from continuing their education. The overall quality of life of these young children decreases the earlier they marry.

The largest numbers of child marriages occur in Southeast Asia, but governments and organizations throughout the world aim to stop the practice. Organizations like YTP mentioned above and the International Center for Research on Women are working to combat child marriage, but they need our help. Prevention and protection of these children are at the top of the agenda. To see ways to help stop this practice and the factors that cause it, please visit their website at the following link