It’s officially fall now, which means the Arab Spring has now entered its third season, and, unfortunately, the economic situation that partially contributed to the uprisings in many of the countries has not improved at all.  In many cases it is even getting worse. 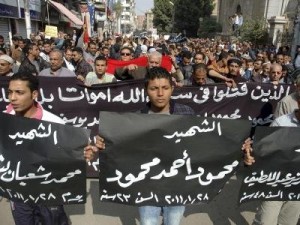 Institutions like the International Monetary Fund and the European Investment Bank, as well as many governments, have offered the Arab Spring nations economic aid, but the traditional model used by multilateral lenders is clearly unsuitable for the region and difficult to implement.

The traditional economic model, which has been used in the region in the past, tended to be compromised by the regimes, which spent the money on themselves and their families. Changing that model is critical for addressing the area’s many financial woes, which include high unemployment, high inflation, and a lack of investment.  The new governments, too, are wary of the traditional economic model of financial aid; they fear being associated with the West and with the previous regimes.  Also, some non-governmental organizations have asserted that Western aid could damage the transition to democracy by promoting the crony capitalism of the previous regimes, and that a new way to offer aid and support inclusive growth must be found.

So just how bad is the economic situation?  Well, it was bad when the Arab Spring began, and the turmoil since then has interrupted normal business, deterred tourists, and scared investors.  The IMF just released the 2011 World Economic Outlook report, and it states that the Egyptian GDP will grow at a quarter of its 2010 level, Tunisia’s will not grow at all, and Syria’s economy will shrink.  These new predictions are lower than the IMF’s earlier economic predictions, made in April of this year.  Of course, it’s not all bad: some parts of Egypt’s economy, for example, have held up despite the turmoil.  Unfortunately, investment has fallen, consumer spending has dropped, and about 600,000 jobs were lost due to the unrest.  Labor strikes, group suicide attempts, and insecure (former) tourist attractions all add to the economic woes of the area.  Many of the economies in the region are highly unstable, and will continue to be until the turmoil ceases, which could take a long time.

What can be done?  For all the reasons mentioned above, the traditional economic model is clearly not going to be helpful—or even wanted.  The IMF suggests, in its report, a medium-term growth agenda that establishes strong institutions to stimulate private sector activity and opens up economic opportunities, which would involve restructuring financial policies and creating jobs for the youth in the region, who are the least likely to be employed and are (surprise) often driving the revolution.  Another suggestion is to promote growth by supporting small businesses, the transportation industry, social housing, and urban development.  A third idea is to create a new Arab bank for development, which will insure that the money will not disappear through mismanagement and a lack of corporate governance.

Whatever ends up happening, whichever plan ends up being followed, it has to happen soon.  The unrest in the area has contributed to the economic difficulties being faced now, but the economic woes were one of the main contributors to the unrest in the first place.  Nothing is going to improve politically and socially if there is no money, no growth, and no jobs.  Just throwing money at the area is only going to further those problems, though, as it does in most cases—and has in the past.  Building up small businesses does seem like it would be helpful, as that would help create new jobs, and something definitely has to be done to prevent corruption from taking over as it did before.  What do you think could help improve the economic situation?