I woke up giddy yesterday. My clock read 12:25, and my heart started to pound in anticipation. I felt like a kid on Christmas morning. After nine months of waiting, I’d finally woken up to an onslaught of NFL games. I turned on NFL on Fox theme music as I changed to pump me up, and I could not have been more excited by opening kickoff.

But when I turned on the tv, I saw players holding onto flags the size of the football field as fans, players, and referees belted the national anthem. I felt a wave of guilt and 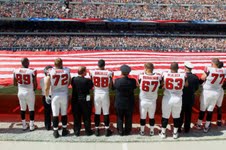 shame hit me in the stomach as I realized yesterday wasn’t just opening Sunday for the NFL. It was also the tenth year anniversary of the September 11th attacks.

As I’m sure many of you did yesterday, I took some time to reflect on the attacks. I recalled vivid memories of finding out what had happened, discussing what it meant with my equally oblivious sixth-grade classmates, watching the news all day when I got home, and following how the attacks affected American foreign policy.

A lot has changed in the past ten years. The wars in Afghanistan and Iraq seem to be winding down. Osama bin Laden is finally dead. But as I watched the September 11th tributes before the game today, I remembered that the attacks had a profound effect on America. And tons of people, many of whom were the heroic men and women who saved lives that day, are still bleeding.

With many millions of people’s lives so deeply affected by one instant in time, America had to learn on the fly how to handle large-scale psychological trauma among its citizens. In the months following the terrorist attacks, incidence of PTSD rose to 4.2 %. The trauma was particularly crippling to retired firefighters (22%) and survivors earning less than $25,000 per year (49%). Many citizens also faced depression, anxiety disorders, and other mental disorders following the attacks.

But not all news about the psychological health of 9/11 survivors is quite as bleak as what I just listed. Having observed treatment on veterans and other survivors, researchers have established new strategies to treat people following terrorist attacks. Previous protocol for large-scale trauma has been deemed too brief and inadequate. In fact, researchers have even realized that interventions typically used in the past might be so unhelpful that people decide not to pursue further, more intense help. The new, more accepted approach towards widespread psychological first aid includes a five-step approach:

Armed with new knowledge, Americans and people worldwide are more capable of dealing with trauma. For example, many Haitians are receiving the reformed psychological first aid to jump start the rest of their lives. The progress made in this time of tragedy reinforces why I love this country so much. Americans strive under adversity. We come together. We learn. We innovate. Making this progress makes our next case of adversity so much more manageable. 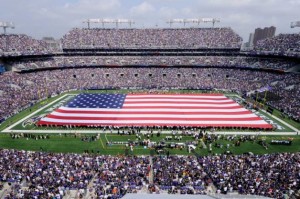 While we can’t bring back the dead, completely heal the injured, or completely repair the damage, we can learn from what happened ten years ago. We cannot allow our obstacles to get in our way of making this world a better place; rather, we should let them inspire us. Whether the trauma happens on a huge level (i.e. 9/11) or a smaller, more personal level (i.e. death of a loved one, mistake you’ve made that you regret), let it drive us forward. By seeing silver linings on our darkest days, we’ll manage to get through tough times and maintain our status as the great country we are today.