Is Polygamy a Form of Human Trafficking?

Warren Jeffs, a polygamist religious leader and head of the Fundamentalist Church of Jesus Christ of Latter Day Saints (FLDS), was found guilty yesterday of child sexual assault charges stemming from a 2008 raid on his Yearn for Zion (YFZ) Ranch in Texas.  This was not his first stint with the law, as he was on the FBI’s Ten Most Wanted list several years ago for suspicion of sexual misconduct with a minor and 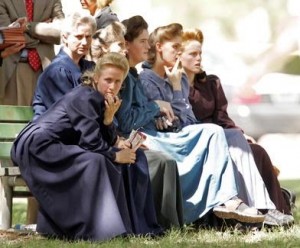 conspiracy to commit sexual misconduct by arranging marriages between older men and young girls in his religious sect.  Given the evidence that was presented in court, his past run-ins with the law, as well as general knowledge about polygamy, I question whether this is simply a case of sexual misconduct.  Could polygamists such as Warren Jeffs be considered human trafficking perpetrators?  Could the women and children who have no choice in decisions over marriage and sex be considered human trafficking victims?

Human trafficking is sort of this three-fold phenomenon that the U.S. Department of State defines as:

1)      The process of recruiting, transporting, transferring, harboring, or receiving of persons.

2)      Completing the process by means of threat, coercion, abduction, fraud, deceit, deception, or abuse of power.

3)      With outcomes that may include prostitution, pornography, violence/sexual exploitation, forced labor, involuntary servitude, debt bondage, or other forms of modern day slavery.

In order for a case to be considered that of human trafficking, it must meet at least one condition from each set of criteria.  For an adult to be considered a victim of trafficking, one of the employed means listed above must be met.  For a child, the means are not relevant to being considered a victim.  Given the events that occurred under the religious leadership of Warren Jeffs and assessing the benchmarks listed above, I would argue that his actions fall under the umbrella of human trafficking.

Warrens Jeffs, hailed a Prophet by his followers, used a process of recruiting underage girls for the purposes of “spiritual marriages” arranged for himself and other older men in his religious community.  In essence, these marriages most often involved that of child brides who were later forced to engage in sexual relations with their “husbands.”  Other marriages involved that of women to men, many times in the form of incest relationships such as that of cousins, siblings, or even parent-child.  Jeffs himself married many of the wives of his deceased father, including his own mother.  In the FLDS community, polygamy is a seen as a necessary means to achieve the highest level of salvation, but it is also a practice that is illegal in the United States.  Jeffs’ role in FLDS is that of ultimate power—a title and position of “President and Prophet, Seer and Revelator”.  This position deemed him as the only individual in the religious community who could arrange and perform marriages.  Therefore, he is the primary recruiter and transporter in marrying children off to adults, and receiver in taking female children as his wives without the consent of either child or parent.

Jeffs’ leadership position in FLDS is one of power and abuse.  He used his radical religious beliefs and leverage in the FLDS community to exploit women and children in marriage, sex and slavery.  This can be seen in the case of Elissa Wall, a 14 year old girl who was forced to marry her 19 year old male cousin, at the discretion of Jeffs.  She begged and pleaded with Jeffs’ father (who was the Prophet at the time) and Jeffs himself not to make her marry her cousin.  Jeffs did not listen to her desperate plea and coerced Wall into the union with her cousin telling them to “multiply and replenish the Earth.”  He was later convicted in court as an accomplice to rape.  Fraud, deceit and coercion can be seen in the evidence presented in his most recent trial for sexual assault.  Presented to the judge and jurors was a confiscated audio tape in which Jeffs was having sex with a 12 year old girl and telling her to “feel the spirit of God.”  Other tapes were presented as evidence that included Jeffs “training” young brides in how to sexually please their husbands.  In one, he was heard telling his 14 year old wife and another one of his child brides that “a good wife is trained for her husband and follows the spirit of peace.”  In another involving a training session of 12 young girls, Jeffs was heard telling them they were “honorable vessels, property of your husband’s kingdom and the Kingdom of God on Earth.”

The outcomes of Jeffs’ recruitment of child brides and his abuse of power in arranging forced marriages include sexual exploitation, involuntary servitude and a general life of modern day slavery.  As is the case with Elissa Wall, many minor girls were forced to marry older men, have sex, and reproduce.  Under this male-dominated, patriarchal society, women and young children were expected to cater to their husbands’ sexual needs and desires; hence, the training sessions Jeffs facilitated to prepare young girls for their role in their families and community.  In his current trial, DNA evidence was presented demonstrating that he impregnated a 15 year old child bride.  Elissa Wall wrote a book, Stolen Innocence, about her experiences growing up in FLDS.  The trauma Wall endured in addition to nonconsensual marriage and forced sexual relations, such as her physical and emotional hardships related to multiple pregnancies, is associated with the negative effects experienced by victims of human trafficking.

Warren Jeffs claims religious freedom in the practice of polygamy, but given the circumstances particularly as it relates to the essential “selling” of children to older men for sexual purposes, I beg to differ.  I would classify his case as that of human trafficking.  That is not to say that all cases of polygamy should be considered trafficking, but in my opinion this one does.  What are your opinions?