In my latest article, I claimed “power corrupts when allowed to exist unsupervised.” This claim doesn’t just apply to prison guards. It also extends to politicians, businessmen, and other people in positions of power. The widespread corruption around the world supports this claim. Every year, billions of dollars are laundered around the world. Corruption is particularly bad in India, where approximately 1.4 trillion dollars have been stashed away in foreign banks. This “black money,” often deposited by the wealthiest Indians, is untaxed. 1.4 trillion USD is not an insignificant amount. In fact, it is slightly more than Indian GDP.

After generations of seeing widespread and blatant corruption, the Indian public has had enough. Over the past 6 months, Indian social activist Anna Hazare has spearheaded an Anti-Corruption Movement. He hoped to get the Jan Lokpal Bill in 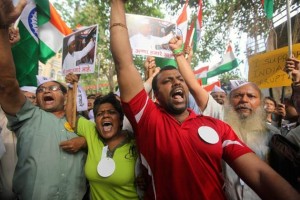 The Anti-Corruption Movement continued to gain momentum, and on August 16, Hazare, a Gandhian, announced that he would go on an indefinite fast until the Lokbal Bill became law. On the same day, Hazare was arrested by Delhi police for refusing to follow orders to stay at his home. Hazare also refused to leave jail and remained detained until August 18th, when the Delhi police finally granted him permission to fast as a statement against corruption. Hazare continued to gain support from Bollywood actors, musicians, athletes, and millions of other Indian citizens. Just today, the Indian Parliament acquiesced to Hazare’s demands, and after 12 days of fasting, Hazare finally ended his hunger strike. Parliament unanimously agreed to create an anticorruption agency, which will oversee the government and attempt to prevent corruption.

As an American of Indian origin, I have followed this news story with pride. I am amazed that so many people united and made sacrifices to do what was right. The story reminded of the quotation by Margaret Mead that my supervisor Thenera includes at the bottom of all her e-mails:

Never doubt that a small group of thoughtful, committed citizens can change the world; indeed, it’s the only thing that ever has.

I often worry that cynicism has stifled our passion. We live in a world where political leaders receive millions of dollars from lobbyists and corporations. Sure, our country was founded on democratic principles, but it often seems like the voices of the elite are heard more often and more loudly than the voices of the masses. But no matter how much money lobbyists and organizations pay a candidate to fund his campaign, he cannot get elected without the support of the people. Hazare and his followers serve as an inspirational reminder to the rest of the world that we do not have to blindly accept the status quo. We can still achieve great things. The onus starts not with our leaders but with us to make things better.

India is not alone. All countries are prone to experience corruption. I recently read about two judges in Scranton, Pennsylvania who accepted millions of dollars from owners of privately-run juvenile detention centers. These judges would not tell defendants their constitutional rights and often gave defendants disproportionate sentences for crimes. Over 4,000 cases were invalidated. Such corruption from our judges is despicable and unacceptable. Kids were jailed simply because a judge wanted to profit. While the culprits have been discovered and punished in Scranton, there is bound to be similar corruption elsewhere. If citizens find evidence of such corruption, they should not hesitate to follow in Hazare’s footsteps.

Civil disobedience is not a novel concept unique to Hazare. Transcendentalists such as Henry Thoreau preached these ideas over a century ago. Independence and civil rights leaders such as Mahatma Gandhi, Martin Luther King, Jr., and Nelson Mandela used Thoreau’s teachings to earn freedom for people in their respective countries. Its effectiveness everywhere demonstrates that all people are empowered to change the world where they see injustice. When we see injustices as egregious as the ones in Scranton, we should not hesitate to use some of these same techniques to do what is right and make things better.