Recently, the quality of education in the United States has been under siege by numerous people including researchers, parents, and even educators themselves. It seems as though there are solutions to America’s education debate thrown around on an almost daily basis, but no outcome has been seen as of yet. However, there are some proven solutions to education issues, one of which is the reduction of class sizes. Prominent individuals at the helm of education reform like Bill Gates and the current education secretary, Arne Duncan, both attended private schools with small class sizes. Though studies have shown the success of small class sizes, and education reformers themselves have reaped the benefits of such a class structure, the economy and budget cuts are once again negatively affecting the quality of education.

According to numerous research studies conducted in the United States, Hong Kong, England, and Switzerland, reduced class sizes benefit children from an early age. Adam Gamoran, from the 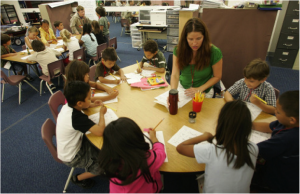 University of Wisconsin-Madison, explained that young students tend to learn more in a smaller class because they have a closer connection to their teacher. Due to the fact that the teacher has fewer students competing for his or her attention, children are able to learn in a more hands-on and engaging environment. A small class size allows teachers, if they take advantage of the situation, to interact more with an individual child, and create more innovative and interesting learning experiences for students to take part in. The early exposure to small class sizes is particularly important for age groups starting from kindergarten through third grade because those same children will continue to perform well in high school. Such is the success and value of classes with a smaller number of children.

Though smaller class sizes are effective for children from all socioeconomic backgrounds, they are especially helpful for young students from lower income families. A Milwaukee study showed that first graders from low income backgrounds performed significantly better in math and reading than first graders from large classes. Furthermore, young African-American boys made huge gains in a smaller class setting by scoring 40 percent higher on tests compared to boys in bigger classes. A move to smaller class sizes has proven to also be successful in some of the nations poorest schools. Thirty of the poorest schools in San Diego decided to lower their class size from 30 to 17 after looking at data produced from the Tennessee STAR project. The research project, conducted in the 1980s, had produced the same results as the Milwaukee study; a small class size means better education for young children from all economic backgrounds.

Unfortunately, the condition of the economy has led to hefty budget cuts that have caused class sizes to increase. The Central Kitsap School District in Washington will be having larger class sizes in the upcoming year due to a budget cut that eradicated a class size reduction fund. Sadly, this is not a novel case because it will be happening to a myriad of school districts across the nation. Despite statistics and research that prove there are benefits to small class sizes, budget cuts continue to force schools to consolidate their classes. Larger class sizes may be the answer to the economic crisis the country seems to have found itself, but they negatively impact thousands of young children.

As many previous posts regarding the future of America have shown, the quality of education is quickly becoming a hot debate. It is sad to say that the United States, as a developed country, has not been putting enough funds and resources into its education system. Lately, much of the blame for education issues has been put on the shoulders of thousands of teachers, but it may not entirely be their fault. Teachers in low income areas are usually penalized for their low success rates, but the fact of the matter is that they lack resources. Limited funds cannot guarantee high test scores, extracurricular activities, or high performances from teachers. In today’s society, if the United States desires to properly prepare future generations for the world, education reform needs to be assessed from various angles; not just teacher evaluations.