If you have been paying attention to the news for the past few weeks, you know that there has been a lot of controversy surrounding the United States’ debt ceiling. Theoretically, we have a debt ceiling to control federal spending. This ceiling puts a cap on the amount of bonds the Treasury can issue. If our overall debt surpasses the current debt ceiling ($14.3 trillion), we might not be able to pay off interest on existing debt.

Our current debt has effectively reached the debt ceiling. This means, if our politicians don’t act soon, our government may default on its debts. Such a default would be bad for our credit ratings and potentially catastrophic to the global economy.

Though this news may seem alarming at first, it shouldn’t be that scary. Our politicians know how bad it would be to default on debts, and in the past, have passed legislation to raise the debt ceiling as needed. In fact, the debt ceiling has been raised 74 times since 1962, including 10 times since 2001.

Given this statistic, it seems pretty clear that the debt ceiling doesn’t do that good of a job controlling federal spending. Regardless of what the debt ceiling is, Congress often decides to spend beyond its means under the assumption that an increase on the debt ceiling will easily be passed. After all, the consequences of not passing such legislation are calamitous. 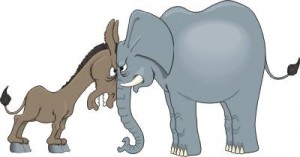 Republican majority has issued an ultimatum, refusing to raise the ceiling unless Democrats promise to cut spending by $2.4 trillion and abstain from raising taxes. Although Democrats agree that spending should be curtailed to some extent, they think that they should raise taxes on the rich to help generate.

Because of their incompatible preferences, our politicians have reached a standstill. But decisions on federal spending are far too important to be made hastily and under a gun. For example, it is not fair to American citizens for our politicians to pass huge cuts on federal programs such as Social Security or Medicare just because the alternative (a default) is unacceptable. Our politicians need to raise the debt ceiling now so they can worry about spending cuts and tax increases without worrying that our government might default on its debt. Instead of being mature adults, they have opted to act like street racers in the Fast and the Furious, playing chicken with our futures. Each side is hostile and unwilling to compromise, hoping that the other side will cave in and begrudgingly agree to an unfavorable deal.

Though I think it is disgusting that our elected officials are using the debt ceiling as leverage to force the opposing side to accepting their proposed deal, some good might come out of this process. Our debt has spiraled out of control. Repeatedly, our government has chosen to mortgage our future in order to mitigate economic damage and please constituents in the short-term. This problem has been especially exacerbated over the past decade, during which our government has financed two wars, passed huge stimulus packages, and lost tax revenue as a result of tax cuts to corporations and to the wealthy.

Whether you think we need to drastically cut spending, increase taxes, or do a bit of both, one thing is clear – our current deficit is not sustainable. We need a plan to lower or eliminate our deficit and make our debt affordable in the long run. Hopefully, since the issue of the debt ceiling has brought the problem of our growing debt to the national spotlight, our politicians will take their responsibility to balance the budget more seriously. I think that, regardless of our political affiliations, we can all agree that our government needs to spend more wisely and efficiently and needs to find a way to increase tax revenues without negatively impacting our economy.

You may wonder why I was compelled to write about the debt ceiling and federal spending when my research interests for the SISGI Group pertains to mental health. But I think the topic is actually very relevant. With a possible impending (and perhaps much-delayed) return to fiscal conservatism, I am worried about where our spending cuts will come from. Clearly, we need to make some cuts. However, I do not trust our politicians to come up with the best spending decisions; rather, I expect them to be shortsighted and do what appeals most to their constituents.

One of the reasons it is so hard for our government to make spending cuts is because cutting social programs is really unpopular. Politicians should expect to lose votes if they advocate cutting Social Security, Medicare, or lowering salaries of public workers. On the other hand, spending cuts on academic research and education do not have as many direct victims. Thus, politicians often make cuts on these long term investments that would have made us better off in the future.

David Brooks, writer for the New York Times, recently made this point in his column “The Unexamined Society.” He discusses the danger of a proposed bill to eliminate funding for the National Science Foundation’s Directorate for Social, Behavioral and Economic Sciences. There is still so much we do not understand about human tendencies and behaviors. These fields that our government is considering cutting funding for are all fairly new. With such new subject matter, about which we have tons to learn, why cut funding now? Costs are relatively low, and potential gains are enormous. Brooks compares “cutting off financing for this sort of research now is like cutting off navigation financing just as Christopher Columbus hit the shoreline of the New World.”

I fear that, when making budget cuts, our politicians might ignore the many possible benefits of research in the social sciences. Who knows what these researchers could discover. Perhaps they could find out enough about human behavior that they would know how to improve treatment for people with mental illnesses. Or perhaps they would learn ways to run an economy more efficiently. We can obviously use these kinds of findings. But I anticipate that politicians will recognize that cutting spending on this research does not have nearly as many direct ‘victims’ as does cutting social programs. Thus, I expect them to make shortsighted spending cuts on academic research and education in lieu of unpopular spending cuts on social programs or tax increases.

In the coming weeks, it would be nice to see our politicians grow up and raise the debt ceiling without making hasty decisions about the budget. I also predict and would like to see more fiscal conservatism in Washington. However, I really hope our politicians don’t cut down on important, potentially fruitful academic research. They have mortgaged our future enough already.