There are currently one billion people around the world who are hungry. With inefficient farming practices, poor distribution, record high food prices, and a global population that’s expected to reach over nine billion by 2050, food security is a huge challenge worldwide. Plain and simple: current methods aren’t working, and changes must be made in order to meet present needs while preparing for the future. The way we make and distribute food is not just unsuccessful, but unsustainable.

Food security is a complex problem, so the solutions certainly won’t be simple. It is the intersection of research, technology, science, and government and international support that will bring the innovation necessary for change. A rapidly growing global population has created a new urgency to end hunger. According to the Food and Agriculture Organization (FAO), food production needs to increase by 100% in developing countries – and 70% globally – in order to eradicate hunger. Those are not small numbers, which means that each plan for a solution will be ambitious and they’ll have huge obstacles.

Food security is also not a new problem. There are many organizations that are trying to eradicate hunger and develop sustainable ways to produce and distribute food. The FAO, 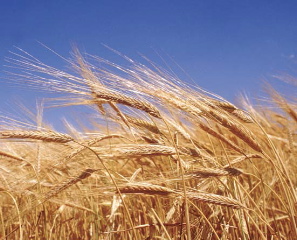 for example, has introduced a new farming model called Save and Grow. The initiative is hoped to increase food production sustainably and without compromising the environment. Save and Grow intensifies crop production without the use of pesticides or techniques that affects soil’s fertility, like tilling and ploughing. The initiative targets smallholder farmers in developing countries and enables them to minimize food production costs. With these savings, farm families can invest in themselves in other ways, like education.

Additionally, The DuPont Advisory Committee on Agricultural Innovation and Productivity for the 21st Century has spent about eighteen months analyzing the numerous challenges that are faced and potential solutions to eradicate hunger. One farming practice they identified that makes a huge impact on food production and distribution is simply having some type of storage facility for seeds and harvested grains. This doesn’t have to be a huge, expensive structure – just a small building would be sufficient. Without storage, farmers can reportedly lose more than a third of their harvest to environmental factors and pests. If it’s unrealistic for each and every farm family to have a storage facility, perhaps there could be shared buildings or community storage areas that farmers could use.

There are also efforts being made to combat a wheat fungus that has spread throughout Africa and is anticipated to reach India and Asia as well. The fungus threatens the viability of wheat and consequently hampers the already inadequate food supply. At the Kenya Agricultural Research Institute (KARI), scientists have been working on developing wheat strains that are resistant to the fungus. Amazingly, these resistant strains could become widely available in as little as three to four years. This increases the ability to avoid famine and perhaps the ability to develop other crops that are resistant to a certain fungus.

The good news is that hunger and food security issues are being attacked from multiple angles, which gives the potential solutions the greatest chance for success. From revamping farming practices and techniques to organizations simply delivering food to areas where hunger is prevalent, efforts are being made to eradicate hunger worldwide everyday. It’s important to continue brainstorming, researching, and pursuing new ideas that will (hopefully!) work together to finally put an end to hunger for good.