Violence against Women with Disabilities

A Closer Look at the MDGs

In September 2000, the United Nations established eight Millennium Development Goals (MDGs) in hopes of improving social and economic conditions in the world’s poorest countries. The MDGs have caused governments around the world to rally together in a global partnership to make significant progress in some of the most 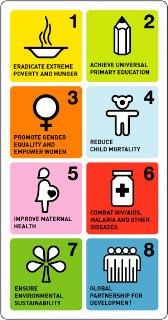 challenging areas in the developing world. The eight MDGs are to:

I think a global partnership working together to achieve the MDGs is a wonderful initiative – it allows for concrete plans to be made in order to combat the challenges that have plagued the developing world for decades. With the 192 countries in the U.N. combining efforts and strategizing to make change, I wholeheartedly believe in the success of the MDGs and a world without these problems.

The ultimate goal is to achieve the MDGs by 2015. That’s… ambitious, to say the least.

Don’t get me wrong – in the past ten years, there have been many successes that make the deadline seem realistic. However, this progress has been slow and uneven. For example, there has been great economic success in Asia that makes the goal of halving the number of people living on less than $1 per day by 2015 very achievable. On the other hand, there has been substantially less progress made in reducing poverty in sub-Saharan Africa.

Of course, this uneven progress is to be expected. Despite all developing countries having common MDGs, each nation has its own needs, abilities, and challenges. There is no one-size-fits-all approach that works for every country, and it takes time to figure out exactly what interventions will work best for each area.

There is also the perpetual variable of uncontrollable and unpredictable events that may stall the achievement of the MDGs, such as a natural disaster that can halt – or even reverse – any progress made. In January 2010, for example, Haiti was struck by a devastating 7.0 earthquake that left its capital city Port-au-Prince in ruins. Needless to say, the nation has fallen behind in achieving many of the MDGs, and reaching those goals by 2015 has become simply unrealistic. Haiti has the much more urgent task of recovering from the earthquake and rebuilding its capital.

Since the 2015 deadline is less than four years away, there has been a renewed sense of urgency in order to ensure that all developing countries are on track to meet the deadline. However, just because some countries are falling short of the MDG targets does not mean they’re not much closer to achieving them than before the MDGs were established. While I don’t think the 2015 deadline is necessarily a bad thing, I do think it’s important to understand that it’s an extremely fluid time frame. Not only are there so many factors that can affect progress – or lack of progress – toward these goals, but also the sheer difficulty of overcoming these extreme problems (all at once!) cannot be underestimated.

It can’t be considered a failure if not every country achieves the MDGs by a certain time – the 2015 deadline should by no means be the be-all-end-all date. If the deadline isn’t met, what’s the worst that can happen? It takes a country an extra year or two to achieve one of the extremely ambitious goals? The key is to work for long-term success, not for the fear of failing to meet a deadline.

I do understand the rush – after all, the problems that the MDGs address haunt the developing world on a daily basis, and it seems like every moment in poverty is one moment too long. However, the MDGs were established to bring about change to the developing world, and the urgency to achieve the MDGs by a certain deadline simply cannot compromise the opportunity and ability to make sustainable change.