I watched the Heat vs. Mavericks game last night—cheering for LeBron, Wade, and Bosh the whole way.  Unfortunately, they lost this one.  However, it had me thinking about why men’s sports teams are so glorified and women’s sports teams so devalued.  Not only are women athletes and sports teams often devalued—they are very often suppressed, degraded, or non-existent.

With the 2012 Olympics quickly approaching, there have been several reports highlighting issues surrounding sexism and gender injustice in sports.  To me, the 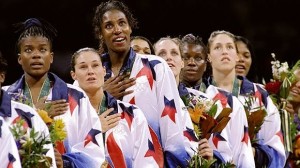 Olympics allows for female representation in sports that is otherwise generally ignored cross-culturally.  For instance, it was found that in a three week period of airtime on ESPN, female athletics were only mentioned 2% of the time.  However, in the Olympics women athletes are often depicted on the front pages of newspapers and hailed champions for their boisterous wins.  Unfortunately, gender inequality and sexist attitudes persist even in the most unified series of athletic events known as the Olympics.  Despite women proving time and time again that they are strong, capable, and respectable athletes—in the same way as their male counterparts—they continue to face opposition.

It never ceases to amaze me how females are often portrayed as mere symbols of sex rather than of athleticism in sports.  Although it can be argued that women athletes posing erotically on the cover of magazines represent the empowerment of women as fierce athletes and femme fatales simultaneously, I beg to differ in most circumstances.

It probably comes as no surprise that sex sells.  Throughout history, society has been socialized to perceive women in a sexualized and subservient manner.  While we have come a long way (at least here in the U.S.) in accepting women as more than sexual objects, media often continues to reinforce gender stereotypes.  The Women’s Sports Foundation lists a number of questions to ask oneself when evaluating whether an image of a woman athlete is sexually exploitive:

I would argue that many times, female athletes posing in ads or magazines do not meet the criteria, although there are always exceptions.  The intentions of those behind media advertisements or other marketing initiatives are important in shaping society’s perceptions of women (and men).  Media outlets can be key players in diminishing sexism and gender stereotypes across the board if following ethical guidelines, such as those posed above.

Femininity is currently being used to market women’s sports and increase public recognition—but I question whether this is counterproductive.  The Badminton World Federation enforced a new rule in the sport whereas women are forced to wear skirts or dresses, forbidden from wearing shorts, in the name of “aesthetics” and “increasing popularity” among the masses.  It has been a major topic of controversy, particularly coming from female athletes in the sport itself.  Although the Federation denies that they are being sexist, I think that using stereotypically “feminine” attire to market the sport falls under that category.  While it is commendable that the Federation is seeking recognition for their female badminton players, I cannot help but to wonder if changing the uniforms will market the sport in the wrong way.  Will the public be watching the sport to watch women in skirts or women athletes?