“Every generation of Americans has brought our Nation closer to fulfilling its promise of equality. While progress has taken time, our achievements in advancing the rights of LGBT Americans remind us that history is on our side, and that the American people will never stop striving toward liberty and justice for all.”

It probably comes as no surprise to most, that the United States is far from reaching total equality for all Americans.  The Obama Administration has been slowly, and often times quietly, taking actions and transforming legislation to grant and protect the rights of the LGBT community since his term began two years ago.  While Obama has been criticized by LGBT rights activists in the past, it appears that equality seekers are now building trust in the President’s promises.  An example of this comes from the Human Rights Campaign’s (HRC), the largest LGBT civil rights organization, early endorsement of Obama in the 2012 Presidential Election.

As many of you may know, Obama declared the month of June as “Lesbian, Gay, Bisexual, and Transgender Pride Month” in 2009 and continues this proclamation into 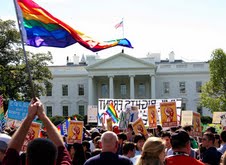 the future.  With this, I’d like to highlight some of the progress in federal legislation, but not without recognizing the courageous fight for equality by activists, regarding the advancement of equal rights for the LGBT community:

While the advancements are many, so are the shortfalls.  Most of the rights listed above are not all-inclusive.  Not all hospitals are mandated to allow visitation and medical decision-making rights for LGBT patients—only those who accept Medicaid and Medicare.  Although far and few between, hospitals that only accept private insurance are not required by law to uphold the same protection rights.  This may seem minute to some but the fact that there is opposition from some states to grant these privileges, and that it is not mandated as a basic human right across the board, is a violation against humanity in my eyes.  I don’t see how allowing same-sex partners to visit ill loved ones is a threat to heterosexual couples or the community at large.  It is not right for any individual to suffer alone in a hospital, particularly when it is due to discriminatory factors.

Since federal law does not recognize same-sex relationships, the Family and Medical Leave Act has shortcomings.  While the legislation was extended to include unpaid work leave up to 12 weeks for LGBT individuals, it is only recognized for the care of children and other family members, not same-sex partners.  Fortunately, several workplaces make strides to grant LGBT individuals the same rights as their heterosexual counterparts when it comes to employee leave to care for their sick partners.  Unfortunately, like hospital visitation and decision-making rights, it is not applied across the board.  The HRC suggests an extension of the FMLA to formally include employee leave to care for same-sex partners.  I think that this is a fair request.  Inclusion is not only an expression of humanity, but is also important for workplace retention; employee satisfaction and morale.

Sometimes I ponder how injustice and inequality came to be.  Where does it have its roots?  The answer is not an easy one.  However, what I do know is that justice and equality must prevail without exception.  I understand that change does not happen overnight, but it does happen.  History shows equal human rights can be achieved.  But it is not without the courageous dedication of supporters and activists.  To find out more about federal and individual state laws affecting the LGBT community and how you can get involved in encouraging positive change, check this out.  Whether it is at the local, state, national, or international level, let’s all do our part—whatever it may be—to push for equality for all.