Brazil, with its growing economy and BRIC designation, is considered a country to watch in the global south, but few people know about the star of Brazil: Curitiba.  Curitiba, capital of the Brazilian state of Paraná, is southern Brazil’s largest city and 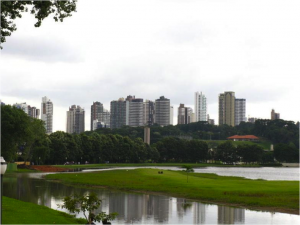 economy, with a GDP that surpasses US$30 billion and a total population of over 3.2 million.  This economic powerhouse was a small backwater town just a few decades ago, but a series of reforms has made it the ‘best place to live’ in Brazil (according to Reader’s Digest)—and now other countries are hoping to adopt those reforms to improve their own economies and standards of living.

Curitiba’s most famous reform is their bus system.  Rather than install an expensive (and often unreliable, as anyone who has ridden the D.C. metro or the Chicago el can attest) subway system, Curitiba’s urban planners decided to implement a Bus Rapid Transit system that was easily integrated into the city.  That way they avoided the heavy costs of digging miles of tunnels and laying down tracks, as the buses can run on existing roads and so the only expenses were buying the buses and building bus stops.  The buses are privately owned by 10 private bus companies, and all ten earn a profit.  The companies are paid by distance traveled, not passenger volume, which allows for a balanced distribution of bus routes and helps ease congestion of major roads, as the bus operators have no incentive to hog the more populated routes.  The buses are fast and are usually on time, and since they charge a flat rate regardless of distance traveled people of all income levels can afford to take the bus.  Further, the buses are all color-coded and serve a variety of needs, from the yellow city street buses, to the grey express buses that run from the suburbs to downtown, to the blue interhospital buses that run between the city’s medical centers.

This Bus Rapid Transit system is just one element of the Master Plan that has helped make Curitiba one of the most powerful cities in Brazil.  The Master Plan was adopted in 1968, and included plans to minimize urban sprawl, reduce congestion, and provide effective public transit—all while preserving the historic areas and increasing the number of parks and “green areas.”  One of the most impressive elements of the Master Plan (besides the bus system, of course) is the way in which urban and economic development was integrated with human needs.  For example, the Cambio Verde program allows poor citizens to trade their recyclables for fresh produce, a solution that reduces waste and promotes environmentalism while improving the standard of living for those of low socio-economic status. The historic blocks were restored and the buildings converted to museums, bars, restaurants, and shops, and now are some of the most bustling areas of the city; again, the economic growth provided by the businesses are combined with human needs and historic preservation. Old buses are taken over by the city and converted so they can be used for a variety of tasks, such as transportation to parks and mobile learning centers.

Other countries in the global south would do well to try to implement some of the elements of the Master Plan, which allows Curitiba to follow the age-old adage of ‘work smarter, not harder.’  By using available funds and integrating development with human needs Curitiba is so powerful that it now needs to create a second Master Plan to deal with the massive influx of immigrants.  Other countries and cities in the global south can learn a lot from the Plan, as can those in the global north.  Even cities in the comparatively prosperous western world could afford to adopt some provisions of the Plan, particularly aspects of the transportation system and some of the green initiatives.  A lack of cheap and efficient transportation plagues many cities—and rural areas—in the global north, and so Curitiba’s Bus Rapid Transit system could be a good model for those areas as well.

Of course, it’s not a one-size-fits-all type plan; Curitiba is such a successful example because the planners understood the way the city worked and what the people needed, but every society has different needs.  Still, Curitiba is a prime example of economic development, and shows that it can happen—and fast—if money is used in the right way.