The World Bank has asked us to imagine living on $1.25 a day and spending 85 cents of that to feed our families. I have also read about estimates which state that nearly 1 billion people from around the world go to bed hungry every night.  These are thought-provoking facts but the truth is that most of us do not want to be  constantly reminded of problems that exist in other parts of the world.

We do not want to hear of extreme weather conditions in other cities, natural disasters miles away from us (so long as the effects do not wash up along our shores), spiking oil prices (so long as the price of our gas remains the same),  poverty in some developing country that we can hardly pronounce the name, constant riots in the name of oppression,  or unemployment (so long as we stay employed). We rationalize that we have enough to deal with within our cities and we hope that someone, an international organization,  or just maybe another country will fix those problems.

The reality today is that not only do problems such as the food crisis exist, the negative 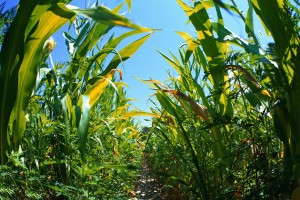 impact on the global economy is becoming so pronounced that we can no longer continue to wait for others to take action. Food prices are up 36% from what they were last year and without new strategies, the crisis may be heading to where you are. Yes it may take awhile, but surely if things remain the same it will get there.

To address the growing concern on this issue and also to seek solutions worldwide, the World Bank held an Open Forum recently in Washington D.C. I found the forum a crucial reminder of an article I had read earlier this year and estimates made about the food crisis in 2007/2008.  Yet, listening to Robert Zoellick, the World Bank’s president, state that he saw no short term reversal in the damaging effect of food crisis, made me wonder where we are heading and what we can do to address this growing problem.

So why is there a food crisis and what can be done to address it? There have been many suggestions as to the causes of the crisis.  For example, some people assert that events in the Middle East and North Africa have contributed to uncertainty and price volatility, while others blame the increasing number of natural disasters world wide,  speculation in the market, high oil prices, misappropriation of funds, the spiraling costs and tight supplies for basic agricultural goods and much more.

I have read several articles and reports that talk about what governments and financial institutions can do to solve the food crisis. Some of the solutions I have come across  include, stabilize and guarantee fair prices to farmers, workers and consumers; halt agrofuels expansion; support locally-based approaches to food production and food system management; re-regulate finance sector investment in food commodities, ensure a balance between food production and population growth,  the need to be less reliant on foreign produced foods etc.

Personally, I believe one major issue that should be addressed is how to make farmers in various countries self-sufficient. And to do this I feel that farmers need the requisite  technology that can ensure mass production. Also, education or training on how to balance demand with supply is very essential.  But whichever method(s) is adopted, the facts remain that actions need to be taken now and both developed and developing countries have crucial roles to play.

To view the questions and suggestions from the Open forum click here.

Do you have any suggestions which can address this problem?