Female genital mutilation (FGM), also know as female circumcision or genital cutting, is a procedure performed for non-medical reasons that is classified by the World Health Organization (WHO) in four different types:

Type I – Partial or complete removal of the clitoris and the clitoral hood.

Type III – The narrowing of the vaginal orifice by repositioning/cutting the labia majora and/or labia minora, with partial or complete removal of the clitoris also being possible.

Type IV – An “other” category that includes any damage done to female genitalia for non-medical purposes, such as pricking, piercing or cauterization. 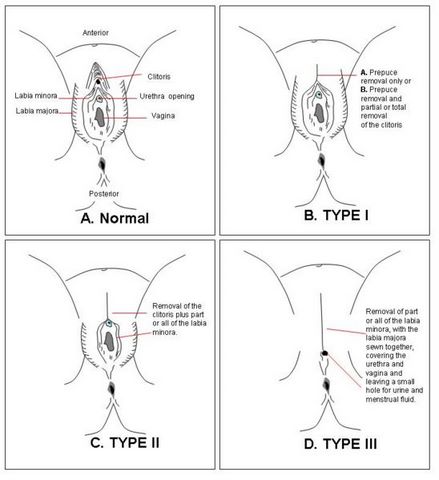 FGM, according to WHO, is mostly centralized in Northern Africa, and to a lesser extent in the Middle East and Asia, although it has also been practiced in immigrant communities in the Americas and Europe. A recent article in the New York Times talks about combatting FGM in the United States. The US actually passed a law in 1996 at the federal level prohibiting the practice of FGM, with many states following suit at the state level. But, as the article in the Times details, there has been a consistent problem with girls being sent abroad to places within the African continent in order to have FGM operations performed. Legislation was introduced last year to prevent these “FGM holidays,” but no concrete action has been taken yet.

It is important to note (and the Times article does point this out, which I applaud it for) that FGM is rarely, if ever performed with malicious intentions. It is seen by many communities as an inherent part of traditional coming-of-age rituals, much the same as male circumcision. Unfortunately, as WHO and other international groups repeatedly report, FGM has several extreme health defects that can range anywhere from extra-painful menstruation to stillbirth and the death of the mother during labor. Not to mention, of course, the obvious discrimination against women by removing an important organ for sexual pleasure.

With an estimated 2 million girls becoming victims of FGM a year, a greater awareness is necessary in order to curtail this extremely dangerous practice. Education is a necessity in this campaign, as organizations like the Senegal-based Tostan have shown. By educating communities about the dangerous health repercussions of FGM, Tostan was able to significantly reduce the number of women and girls undergoing the procedure. Awareness and education are the tools needed, and the United States needs to become a more active participant in preventing the perpetuation of this practice both for its own citizens, and abroad.