A week before the Egyptian revolution began last month, Asmaa Mahfouz, an Egyptian activist, released a vlog that quickly went viral and is widely credited with sparking the protests that eventually ended the thirty-year reign of dictator Hosni Mubarak. In the 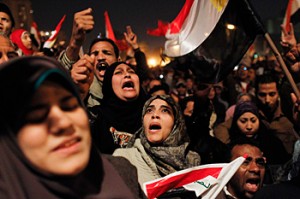 vlog, Mahfouz challenged any men who did not think women should be protesting to show up to the protests themselves to prove their worth as men. In the end, it is estimated that approximately ¼ of the protesters in Tahir Square were women, despite the incredible gender discrimination Egyptian women face.

As the Egyptian military took up its position as a placeholder government and began talks for a committee to write a new constitution, there was great hope that women would at last be included in the discussion of Egypt’s present and future, but those hopes were greatly injured when it was revealed that the constitutional reform committee would be composed entirely of men. There was an immediate outcry from the United States and Egyptian women’s rights activists, and a growing fear that women are about to be marginalized yet again.

Obviously, this is unacceptable. A non-representative committee does little to build confidence in a new, fairer and more transparent government. This, coupled with disturbing news that the committee is only amending the existing constitution instead of writing an entirely new one, raises doubts as to the political will for reform found in the interim government and the Egyptian political elite.

One- fourth of the protesters who brought down the dictatorial government in Egypt were women, and they deserve to have their voice heard. Egypt was ranked 125th out of 134 by the World Economic Forum’s Global Gender Gap Report of 2010, below Iran and Syria, and in the same company as Saudi Arabia and Yemen. The constitutional reforms taking place right now are an incredible opportunity for Egypt to join the international community in eliminating gender inequality and discrimination against women.

Navi Pillay, the United Nations High Commissioner for Human Rights (UNHCHR), said in a statement recently that “in these moments of historic transition in Egypt and Tunisia, it is important to ensure that women’s rights are not set aside as something to be dealt with after the crucial reforms are won.” Women’s rights are not an optional issue. The rights of more than half the earth’s population are not an optional issue. Women’s rights are something that need to be constantly integrated into any and all potential reforms at any level, and should not be seen as something we can think about later once all of the ‘real’ reform is done. Egypt has a historic opportunity today to begin remedying a problem that has plagued it for most of its history. Stand in solidarity with the women of Egypt as they fight for their rights and march for equality.