Since 2003, the conflict in Darfur has been in and out of the international public’s awareness. Over the years, governments all around the world have hesitated to label the loss of life happening on the ground as a genocide, since that would have certain 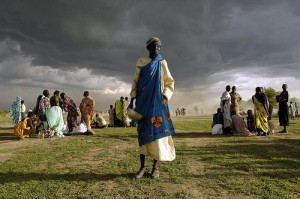 The problems that Sudan has been having for the past several decades with the scarce attention given to it by the media and governments alike puts it into a similar category with Haiti in my mind. We all, of course, remember the earthquake in Haiti last year that leveled the country and resulted in a massive outpouring of goodwill from non-government and government agencies alike as millions of dollars in aid was shipped to the small island to prevent mass starvation or the spread of disease. But, here’s the thing: Haiti was not doing well before the earthquake. In fact, Haiti has not been doing well for the past fifty years at least, what with a dictatorship, several coups d’états, and an infrastructure unworthy of the name.

The point is, Haiti has been a failed state for decades, and it took a natural disaster of massive proportions for the international community to pay them any attention at all. I like to call this the “sexy disaster” effect. The Katrina hurricane damage in the Gulf of Mexico in 2005 and the 2004 tsunami, along with Sudan, are other examples of this effect. It takes something awful for these countries to receive any beneficial attention, and even then it is short lived, as can be seen from the current status of the recovery in Haiti, which has not seen any real media coverage for some months now.

Coming back to Sudan, the sporadic attention it has received over the years has almost come to a halt since the referendum last month where Sudanese citizens voted in favor of splitting the country between the north and the south in an effort to curb the violence. The event was written off as the end of the story, as if the vote meant that peace had been achieved and the conflict would come to a natural and swift conclusion. Unfortunately and, I would hope, obviously, this is not the case. The Abyei region in Sudan has seen an escalation in violence since the referendum took place, and the whole peace plan is on the verge of collapse because of the stalemate there.

Sudan did not suddenly stop needing the assistance of the world’s governments as it makes this difficult transition, in the same way that Haiti hasn’t stopped needing aid since it became an old and boring news story. It is important that we stop using bandaid solutions and begin building lasting infrastructures that will be capable of achieving and maintaining peace. There is still a great deal of work to be done, and it would be an awful waste of time and, more importantly, lives if we were to give up while the race is still on. Continue to be conscious of the issues facing Haiti, the Philippines, Sudan, and all of those other places that you see in the news one day and which are gone the next. The issues in these places have not stopped and still require attention.