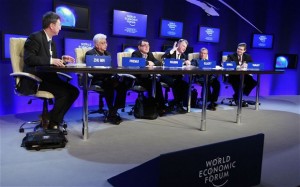 world. Every year, the Forum is held in Davos, Switzerland. This year’s team is “Shared Norm for a New Reality.” The Forum brings together top business leaders, international political leaders, selected intellectuals and journalists to discuss the most pressing issues facing the world.

Last week, I did a lot of research on the Internet, and it seemed just about every website I visited was talking about the protests in Egypt, which is why it came as a surprise to me that these protests could not make it into the official agenda for the World Economic Forum, although certain ministers from a number of countries held meetings to discuss the situation in Egypt. Some people may argue that the debates at the Forum usually focus on global economy, food, security and cybercrime, however, I kept thinking, isn’t Egypt a part of the global economy?

Egypt is a mostly Arab country with the third largest population in Africa. It is situated in Northern Africa. It is one of the most developed countries in Africa and has a fairly robust economy by regional standards. It equally controls the Suez Canal, which is an important trade route for many countries. Egypt also is an important stakeholder in the Israeli-Palestine conflict. Surely, one would think that the strategic importance of Egypt would be enough for the recent events in the country to make it to the top of the agenda at the Davos Forum. Inspired by the recent protests that led to the fall of the Tunisian government and the ousting of the Tunisian dictator, Zine El Abidine Ben Ali, Egyptians have joined other protesters across the Arab world in protesting their autocratic governments, high levels of corruption, and poverty.

I had mentioned the fact that the protests were not part of the official agenda for the Forum to a friend of mine, whose response was “do all those discussions change anything?” Personally, I think to view the Forum, as merely a venue for talking without results, is a misconception. It is true that the Forum does provide a venue for a lot of networking, but the failure to include the protests in Egypt in the official agenda, should not be taken lightly. The fact remains, that the Forum also focuses on other important issues such as trade, the structure of G-20, global governance, skills & mobility of the work force, health, population growth, and the international monetary system. Quite rightly, the results from the Forum are not immediate but the Forum certainly helps countries to focus on important issues, creates further awareness and triggers bilateral and multilateral collaboration among nations in matters of mutual interest.