It’s not only poor subsistence farmers in developing countries who pay the price for agricultural subsidies—we all do. Literally. The subsidies paid to the agricultural industries in rich, Western countries are funded by we, the taxpayer. In the United States, this amounts to about $286 billion in taxes under the 2008-2012 Farm Bill, or approximately $75.5 billion per year. To put this into more palpable terms, it is estimated that the 2008 Farm Bill costs the average American family an extra $520 per year in higher taxes and the inflated costs of groceries caused by other poor policies, such as import quotas and tariffs.

To put these numbers into perspective, allow me to compare what developed countries spend on subsidies to what they spend on international donor aid. Consider the graph below that displays a comparison (in billions of dollars) between what rich countries spend on subsidies compared to aid. Consider also that, were these subsidies not in place, many developing countries would not even need so much in donor aid because they would be more adept to sustain themselves when they could trade fairly on the global market. Because the economies of developing countries are overwhelmingly based on agriculture (90% of all people in Burkina Faso are employed by agriculture, 85% in Zambia and 90% in Malawi, compared to just 0.7% in the US, to name a few) this subsidy-versus-aid ratio hurts poor farmers even more. 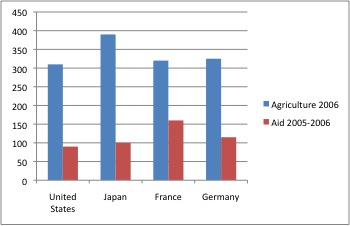 Clearly, I have been suggesting that the removal of agricultural subsidies is a necessary measure to ensure more effective development in poorer countries, but then the question becomes: What about our farms? At the mention of agricultural subsidies in the West, we picture an image of the hardworking, small farmer who is struggling to keep his/her farm competitive. Sadly, the fact of the matter is that the very farmers who could truly benefit from the subsidies are largely not the ones who are receiving them. In truth it is the agribusinesses—large farms, owned and operated by millionaires who likely have never grown so much as a tomato in their life—who benefit from these subsidies. In fact, the richest 20 percent of agribusiness owners receive 89 percent of the subsidy payments in the US. Furthermore, a majority of agricultural crops are not subsidized; rather, selected industries such as sugar, cotton, dairy products, and corn (the excess of course used to make the controversial sugar alternative, high-fructose corn syrup). So farmers who grow our basic staples such as apples, lettuce and cabbage receive nothing, and the small farms that grow the selected crops receive very little.

In other words, agricultural subsidies implemented in rich countries not only hurt the developing world, but they hurt us as well. To be sure, not all subsides are terrible, and it is true that small amounts of payments are necessary to help struggling American, European or Japanese farmers, just as the Malawian government pays subsidies to its subsistence farmers as displayed in the video I posted last week. However, what is certain is that the payment of subsidies in developed countries in an antiquated policy muddled in bureaucracy and strongly supported by lobbyists paid by the mutli-million dollar agribusinesses. What I call for is not a radical removal of all subsides; I ask you, the reader and the taxpayer to carefully consider these facts, do research of your own, and reevaluate your opinion on subsidies. The next Farm Bill is scheduled to be passed in 2012 and is already being negotiated. Be proactive and ask your Congressional leaders to stand for change this year, not only for your benefit, but for the small-scale farmers around the world.