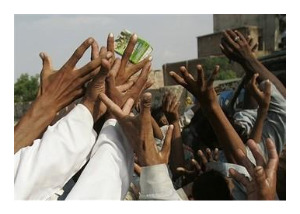 For decades, economists, historians, scholars and the like have studied economic development on the continent of Africa, seeking to explain what factors account for the region’s slow growth. From my own research, two interesting schools of thought have emerged: the concept of the “Poverty Trap” as purported by venerated economist and director of the UN Millennium Project Jeffrey Sachs, and “Dead Aid”, the more controversial argument put forth by Zambian-born economist Dambisa Moyo. Essentially, it is a battle between what the West’s role should be in encouraging economic development in Africa south of the Sahara.

Sachs’ bestselling book, The End of Poverty, became an instant success upon its 2005 release, as he suggested that extreme poverty could be eliminated in Africa during our generation through a few simple actions undertaken by the international community. He juxtaposes the issues of poor governance and poverty in Africa, but instead of suggesting that Africa is poor because of bad government, he asserts that Africa has corrupt leaders because it is poor. This “Poverty Trap”, according to Sachs, is a result of a number of disadvantages that the continent faces, in terms of climate, geography, history and susceptibility to disease. Simple measures such as debt cancellation, investments in health and agriculture, and increases in foreign aid would help sub-Saharan Africa reach the “first rung” on the “ladder” of development, according to Sachs, as evidenced by success stories such as India and China.
Moyo’s 2009 book Dead Aid proved more controversial than Sachs’ concepts of what has caused poverty in Africa. A Zambian woman educated at Oxford and Harvard, Dr. Moyo argues the unthinkable—that foreign aid has caused the poverty that Africa faces instead of alleviating it. She finds that the billions of dollars in donor aid hauled into Africa over the past five decades has created a “vicious cycle” of aid dependency, corruption, and market distortion, leaving Africa in a state of perpetual need for more aid. She debunks the arguments of scholars such as Jeffrey Sachs, observing that if alleviating poverty is so simple, why have all efforts failed so miserably? Through observing the correlation between increased aid and decreased growth in most African countries, Moyo makes the controversial policy prescription that the West must stop its overflow of aid, and instead invest in Africa’s markets.

The purpose of this post is not to argue over who is right and who is wrong; both economists make valid and sound arguments in their respective works. What is more important is expanding our knowledge on the issue of economic development in Africa—understanding the arguments on all levels of the development spectrum. We have good intentions when we say that we want to help Africans out of poverty, but we do the very people we are trying to help an irreparable disservice, if we do not adequately educate ourselves on the differing methods for development. Other interesting books on the topic are William Easterly’s The White Man’s Burden, Wangari Maathai’s The Challenge for Africa, and Giles Bolton’s Africa Doesn’t Matter. I recommend these books because of the differing solutions they offer, and I hope you find them to be as thought-provoking as I have.