On Monday, June 10, 2012 the Obama administration made the long overdue decision to drop restrictrictions limiting access to the Plan B emergency contraceptive pill. Once the F.D.A. approves, the pill be allowed to be distributed over the counter to girl’s of any age without a prescription. While I believe this is a step in the right direction I still don’t understand why this took so long and am confused by the reactions and controversy that continue to surround the topic. 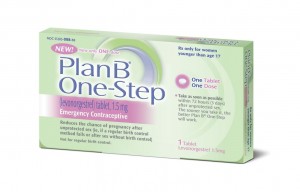 A while back I had written a piece about why contraception should not be controversial, in which I discussed the importance of providing knowledge and access to contraceptives. There are people who argue that allowing Plan B to girls without requiring a prescription is going to open some dangerous doors. Some believe it is going to lead to more promiscuity or think it’s going to encourage and give more power to rapists and sexual predators. While these things may be possible, they lack any kind of scientific proof or evidence and the opposition continues to neglect the great benefits and potential Plan B holds.

Women’s rights groups have been fighting this battle regarding emergency contraceptives for over a decade. In 1999, the Plan B pill was approved as a prescription only product. In 2001 the Center for Reproductive Rights filed a petition for it to be made available over the counter. In 2011 the F.D.A. was urged to lift all age restriction but were overruled. Then this past April, after a federal judge once again ordered to lift the restriction of age — the administration responded to the ruling by lowering the age from 17 to 15.

The age restriction that existed, only allowing girls 15 and older to receive birth control was completely arbitrary. Who is to say that a 15 year old is any more deserving or in need than a 14 year or 13 year old? There is no scientific evidence that the pill is not safe if you’re below a certain age (in fact, studies show that it’s perfectly safe for all ages) and there’s no scientific proof that a 13 year old is any less capable of consuming the pill properly than a 17 year old. I mean, it’s almost an insult to our intelligence. Don’t all girls of any age deserve the right to their own bodies and futures? I understand the main concern surrounding age is that allowing them to buy it on their own removes the parents from the decision. But isn’t the girl making a responsible decision on her own already? Not all teenagers have parents who they can turn to if they need Plan B. They may not have the kind of relationship with their parents in which they can talk about such things openly, and it’s possible that’s the reason they might be in the position to need Plan B in the first place.

The argument that easier access to Plan B endangers young girls by emboldening sexual predators who might impregnate them is also flawed. A lot of right-wing media has tried to link contraceptive access with increased sexual abuse but once again, there is no evidence of this correlation. The Family Research Council has been citing sexual abuse as a reason for opposing giving more young women access, stating, “Additionally alarming is that Plan B ‘access’ advocates ignore the fact that …Removing doctors and parents from the equation will make it much easier for predators to conceal sexual abuse and to force the drug’s use on minors.” But think about it, would it really?

1) There has been no proof that expanding access to contraception increases rates of rape or assault against girls nor does it increase rates of consensual sexual activity among teens.

2) I don’t think pregnancy is something rapists or predators are really concerned about. I mean think about it, a girl doesn’t need to be pregnant in order to accuse someone of rape.

3) Also, forcing the victim to take the pill is not going to make it any easier or harder for the rapist to get away with it.

4) And if the concern is that the girl herself will find it easier to conceal her rape, then I don’t think the rapist has anything to do with that and I don’t think they will even consider it when they chose to rape.

The point is, whether the girl gets pregnant or not, she was still raped and whether she takes the pill on her own, is forced to take the pill by her attacker or doesn’t take the pill at all, is not going to change that fact.That said, the pill and access to it has little to do with rape and sexual assault against women. That’s another problem in itself and should be addressed separately.

Placing restrictions like age or prescription-only in hopes that unintended pregnancies just won’t happen is far too optimistic. In reality, limiting access on the grounds of keeping women safe and preventing assault without evidence, is limiting women to make the choice on their own and may be putting them in more danger. Allowing teens to easily purchase Plan B is vital in preventing unintended pregnancies. We can just sit around making it more difficult for young girls to make responsible decisions in hopes that someday they’ll get it and start practicing abstinence, or we can help them when they need it and give them the freedom to help themselves. Hopes are the administration follows through and once approved, the pill will be made available.