In Palestine, there is a city by the name of Jenin located in the West Bank.  A majority of the city’s population is made up of Palestinian refugees displaced from their homes.  Thousands of young children, teenagers, and college age youth grow up within the walls of this refugee city, and the future they look towards screams of disappointment and hopelessness.  High unemployment rates mean many young people will most likely be unable to find or hold a stable job.  Two schools, one which is forced to run double shifts, are struggling to accommodate students, and thus have difficulty keeping track of attendance records.  The city, which was subjected to intense violence during the Second Intifada, has been unable to fully recover from armored Israeli bulldozers plowing through infrastructure during the battle.

It is difficult to comprehend how the young people of Jenin live, and what it is that they feel, think, and believe about their circumstances.  According to the Israeli Ministry of Foreign Affairs, Jenin is a breeding ground for terrorism and violence, and the youth will inevitably become future terrorists.  Shedding this stigma is a difficult task, especially when it is so very easy for young people to obtain and carry a gun.  However, the young boys and girls of Jenin, as well as children from neighboring towns, have something better to hold in their hands—their art.

The Freedom Theatre, established by Juliano Mer-Khamis and Zakaria Zubeidi, is an institution that believes that the children of Jenin can bring about social change through music, plays, acting, and the arts in general.  It is an artistic haven that is open to both boys and girls, and supports youth and female empowerment.  The theatre 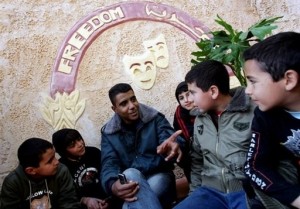 serves as an outlet for the frustration, pain, and hardships young people in Jenin experience on a near daily basis.  Instead of letting the youth become jaded and hardened, the community supports children by letting them imagine a different world, allowing them to step out of their shoes for a moment, and putting on productions that range from calling for non-violent Palestinian independence to exploring family dynamics within the refugee camp.

Nevertheless, violence has followed the theatre from its inception to its current state.  Zubeidi, one of the two founders, is a former Palestinian militant who was once number one on Israel’s most wanted list.  In 2007, he relinquished his guns, and abandoned militancy in favor of expressing resistance through the theatre.  Unfortunately for Mer-Khamis, a Jewish activist and actor who lived in Jenin, life was cut short when a masked gunman shot him five times outside his beloved theatre.  It was a tragic and senseless death, brought on by the very weapons Mer-Khamis urged his students to put down. 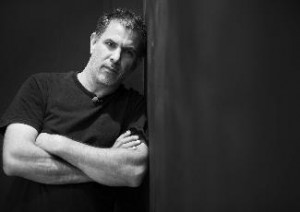 It is interesting and inspiring to read about an artistic community that ties social and youth empowerment in a region like Palestine.  Developed and stable countries like the United States have a plethora of programs to help keep kids from dabbling in drugs, gangs, and violent activities.  Many times we are unaware of just how many youth programs we have in the US, and take for granted the mentors and activities available in every state.  The Freedom Theatre, however, is one of the only places in the West Bank where young people can channel their energies in a positive, healthy, and hopeful manner.  Despite the fact that one of the founders of the theatre has passed away, and the future of the institution is tenuous at best, it is still remarkable that a single institution is pushing for youth empowerment from within Jenin.  The theatre has become a refuge for children who are born and raised within a refugee camp.