In the context of our fragile economic recovery, the prices of food, oil and other commodities have risen again. In December of 2010, the FAO food price index reached its 2008 peak; sugar, oils and fats being among the agricultural products that most significantly increased. For instance, the price of rice rose by 127%: wheat by 136%; corn by 125%, soybean by 107% and milk by over 80%. These changes severely 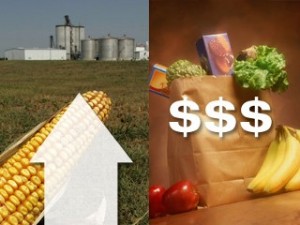 impact the poor, who have no resilience to such abrupt changes.

There are many possible causes that can explain the rising food prices. Many analysts point out to the occurrence of seasonal droughts in grain producing countries. Others point out to the oil price hikes that lead to an increase in fertilizers, pesticides and transportation (see post). Other factors attributed to price hikes are the use of crops for biofuels instead of for food, or the increasing demand of food from emerging economies such as China and India. Additionally, the factors associated with climate change or the continued policies of subsidies in the developed countries are not negligible causes either.

In this post however, I wish to focus on an additional factor that many do not take into account. This factor is the speculative trading of food commodities in futures trading markets. Futures trading markets are markets where commodities are contracted for sell or purchase at an agreed price, just as in any market. What makes these financial markets special is that the trading of the good takes time in the future, instead of at the moment of the agreement.  I can buy some corn today but I know I’ll receive it tomorrow. In other words, one can buy and sell commodities in a futures market regardless of whether or not one has, or owns, the particular commodity involved. For example, a farmer can sell all its wheat before he actually harvest the crops. These type of transactions allow the farmer to hedge his risks, because farmers have a buyer no matter what. He can make sure that he will have an income no matter what the amount of wheat he gets, which fluctuates a lot with season, weather, etc.

However, these markets only work when the people trading have a vested interest in the good itself. When futures markets are opened up to anyone who seeks profit, excessive speculation takes place. Indeed, when one deals in futures markets one does not need to be concerned about having to receive delivery or having to make delivery of the actual commodity, you can always exchange your good by others. For the most part they are cancelled out prior to the delivery month in the manner just described, which is why it is driven by speculation. If everyone thinks that price of wheat will be high in the future, everyone will start buying future wheat in the present. This will reduce the supply of future wheat and drive up prices. But if everyone is buying wheat today, the prices will go up today too. This is a very important market distortion. It happens when the value of commodity goods –such as food, oil, and water- is determined by financial markets (determined by expectations and speculation of agents and brokers) instead of by exchange markets (determined by supply and demand of goods). There may be enough wheat for everyone, but the price may be too high for poor people to afford it.

For example, speculators may make estimations of future scarcity and thus increase the price of a good (more people are buying the commodity that is expected to be scarce). However, their estimation is not necessarily related to the real quantity of the good. This was evident in a recent oil spike. Iran threatened to close oil supply of the Strait of Hormuz because US and EU threatened to place an embargo in their export of oil. Although Iran did not close the Strait of Hormuz, the price of oil spiked because of the speculation that it would. The threats were enough to change the oil of price even though the real supply did not change.

The change of price would be no problem if the suppliers could adjust their quantity as quickly as speculators’ demand. But the agricultural market can not adjust to the variations of the financial markets. Once corn seeds are in the soil, one can not change them to wheat, even if wheat is now more valuable. Similarly, oil and water supply depend on political decision that take time to process, thus not adjusting as quickly as it should.

The United States 1936 Commodity Exchange Act provides that the “excessive speculation in any commodity under contracts of sale of such commodity for future delivery causes sudden fluctuations or unwarranted changes in the price of such commodities”. That is, when there’s speculation of the future prices of commodities, the market is artificially distorted. Given that the market is neither regulated under current US legislation (under Commodity Futures Modernization Act, 2000) nor in the European Union, there has been undisclosed speculation of food prices in the financial markets of the developed world. Pension funds, banks, and institutional investors are the leading participators of the commodities market.

What can be done to reverse the trend of price volatility that is negatively impacting people across the world, particularly the poor? The access to information regarding commodities trading is essential, as in any financial market. Thus, to mitigate it it is essential to increase transparency levels and disclosure of the future commodity markets. Second, there has to be regulatory measures that limit and oversee the speculation, in the international as well as national level (especially in the US and EU). As the president of the Dominican Republic, Leonel Fernandez, stated in the recent high-level meeting on Price Volatility at the UN: the problem of food security is multidimensional. The causes explaining food price volatility are not mutually exclusive. There is a need to increase productivity and increase support for farmers, change subsidies, and create resilience to climate change. But financial speculation is a major cause of the observed volatility and should be treated in tandem.