Understanding the Connections: Refugees and Education

When the recession hit in 2008 I was living in Port St. Lucie, Florida.  Port St. Lucie is a small city on the east coast side of Florida about midway in between Orlando and Fort Lauderdale.  Florida was hit particularly hard by the recession and the unemployment rate jumped from 8% to 16% in some counties during 2008 to 2011.  My husband and I took turns being unemployed.  It was a difficult time for all Americans but particularly for families with young children.  St. Lucie County was one of the worst counties in Florida to live in and we were feeling the economic pressures.

This last year I relocated to Colorado to be closer to family.  The unemployment rate is substantially better at around 8% compared to Florida, which is around 10% currently.  Americans everywhere felt a pinch from the recession.  Hundreds and thousands of jobs were lost and the unemployed stayed unemployed for over a year and in some cases, over two years.  People started dipping into their 401K and retirement plans just to survive.  Forget vacations or big ticket items, people were just trying to get by.

A recession is an awful experience to have to endure but I often wonder about the effect that it has on our children.   Children are particularly vulnerable when it comes 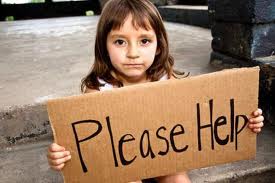 to the economy.  They depend on their parents for support and if one or both parents are either unemployed or under employed they are affected in a major way.  For the extremely poor there are programs such as TANF (Temporary Assistance for Needy Families), Medicaid for healthcare, or SNAP (Supplemental Nutrition Assistance Program).  However, benefits are being cut substantially to these programs and in order to qualify for them one has to be extremely poor.  If a family is just slightly over the income guidelines then they don’t qualify.

Child poverty has risen in the U.S. from 18% in 2007 to a staggering 22% in 2010.  Of course for every impoverished child there are impoverished parents.  The difference and the concern is that children have needs that have to be met developmentally and living in child poverty means some children will go without food for one or more meals per day.  Some of these children will not receive the medical or dental care they may need.  Some will even go without proper clothing such as a warm coat or proper shoes for school.

Poverty impacts our children in every way, physically, emotionally, and 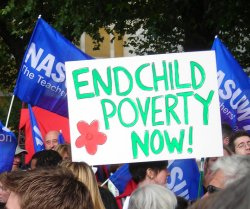 psychologically.  One of the saddest and most visual impacts of poverty is homelessness, which has also increased drastically over the past few years.  The United States is still one of the most powerful countries in the worlds and is still considered a hegemon or country of great leadership and influence.  So why do we allow our precious children to live in poverty?   This is a problem that needs to find a solution, and fast.

I think as a community we need to try to resolve this problem.  The answer is in every community and every member can contribute.  There are charities that get directly involved with children and can make a direct impact on their lives.  Charities such as Big Brothers Big Sisters help children facing adversity which is also a result of poverty.  There are other charities such as Catholic Charities USA which focus specifically on working to reduce poverty in the USA.

Perhaps we all need to donate more to local charities, for those of us who are in a position where we can.  I personally donate clothing to a local women’s shelter every month and food to a local ministry.  I don’t have much to donate but every little bit 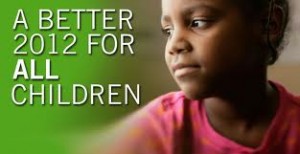 helps.  Volunteering is also a great way to help out.  If everyone was to donate one or two hours a week or even a month, think about what an impact we could make in changing the lives of our children.  What part can you do to help put an end to child poverty? Maybe if we all do our part we can end child poverty in the U.S.  Doing something is better than nothing at all, especially when our children will inherit our tomorrow.

Sarah Anderson is working towards her Ph.D. at Nova Southeastern University with a focus on Conflict Analysis and Resolution. She also holds a Master’s degree in Diplomacy with a concentration in international conflict resolution from Norwich University. Sarah has ten years of experience working in plaintiff’s civil litigation with an emphasis on civil rights issues. She has experience in community mediation, restorative justice, and community conflict resolution. She has a general passion for Diplomacy and improved Public Policy Change with regards to issues of terrorism and human trafficking. Sarah’s focus areas with the SISGI Group are global public policy on terrorism and human trafficking, the growth of U.S. domestic poverty, and international women’s issues.