Several months ago I wrote a post about the small Himalayan kingdom of Bhutan, which, to refresh your memory, operates on the basis of gross national happiness, or GNH.  GNH replaced GDP and GNP (gross domestic product and gross national 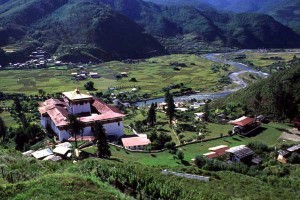 product) as the measure of development for the country in 1972 when then King Jigme Singye Wangchuck was looking for a way to modernize his kingdom while retaining Bhutan’s unique culture and Buddhist values.  As you may recall from my post, this policy has certainly had success, but has its fair share of downsides, too.  For example, while many Bhutanese declare themselves extremely happy, the country’s strict policies on dress, language, religion, etc, have marginalized and angered (and in some cases even forced out) a small, but significant, portion of the population.

Many other countries are considering adopting a “de-Bhutanized” GNH policy (that is, one that does not include strict adherence to Buddhist philosophy and traditional Bhutanese culture) of their own,  as they feel that economic growth should not be the only measure of development.  As people in the Philippines, Taiwan, the UN, and elsewhere seek to find ways to implement GNH, however, Bhutan is eager to experience some GDP growth instead of GNH growth.

Bhutan, as you will hear in the video below, is a developing nation and is highly dependent on foreign aid.  It has one of the world’s smallest economies, based mostly around agriculture and forestry, and India finances nearly three-fifths of Bhutan’s budget expenditures.  After decades of isolation and dependency, the country is seeking to develop economically—though the government will not allow economic growth to get in the way of GNH.  Still, the country is starting to open up and allow foreign and local businesses to develop, a significant step for a country that did not allow roads until the 60s or televisions until 1999.  Daniel Spitzer owns the first ever fully foreign-owned business in Bhutan, a hazelnut farm that he, the government, and 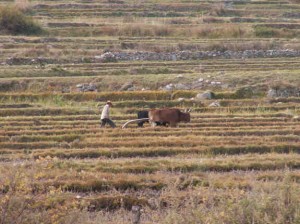 Bhutanese citizens, hopes will be quite lucrative.  The project will, hopefully, employ 15% of the population and benefit about 10,000 households, and give many impoverished farmers the chance to actually make a profit.  Further opportunities for foreign investment are in education and tourism, according to the government, as long as business doesn’t disrupt GNH and the preservation of traditional culture.

I think it’s very interesting that the first country to adopt a measure of development other than GDP/GNP is starting to move away from that model just as others are starting to take the idea seriously.  For example, I read an opinion piece just a few days ago suggesting that Japan should take a cue from countries like Bhutan and Cuba, which have much lower GDPs but significantly higher happiness levels, and focus less on the pursuit of material gain, which the author believes is making Japanese citizens literally sick.  A phenomenon known as hikikomori is sweeping Japan and the author attributes this issue to the wealth of the nation, arguing that to indulge in misery you need money.  Countries like Bhutan and Cuba do not have nearly as much wealth as Japan, and so their citizens cannot afford to be depressed.  It’s a very interesting idea, this suggestion that the relentless pursuit of economic growth not only prevents happiness, but encourages people to withdraw from society (hikikomori).

I, on the other hand, have always believed that economic growth and development play a significant role in happiness and overall human development, though clearly there are plenty of supporters out there for the opposing viewpoint, and their argument does make a good deal of sense. So what do you think?  Will Bhutan be happier with economic development, or should the Kingdom remain focused on GNH and tradition, lest the pursuit of business and material gain lead to unhappiness and even illness?  Let me know in the comment box!  And watch this short video about how Bhutan is blending business and tradition.