For those watching the news on a regular basis, it has been hard not to notice that Secretary of State Hillary Clinton is everywhere. In the last few weeks, she has seemed to collect more sky miles than ever, and has made some significant splashes along the way.

Starting off last week, Clinton was in Burma (Myanmar) speaking to the Pro-Democracy leader Aung San Suu Kyi who working to reform the country and bring 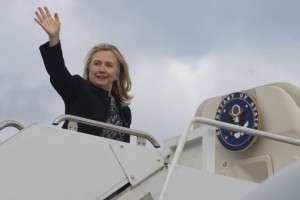 Burma out from under US sanctions. Recently the country has taken small steps to gain trust from the United States. In growing transparency in the government (by releasing political prisoners and lowering censorship barriers), the US has returned the favor by taking initial steps in allowing international development to increase. The fact that Secretary of State Clinton was the envoy chosen to attend this discussion is noteworthy. First, because she is the only high ranking official to travel to the country in half of a century, and second, she spoke on behalf of the President making this visit a promising sign of commitment as well as a challenge to Burma to continue to show results into the future.

From Burma, Clinton flew to Busan, South Korea to attend the Fourth High-Level Forum on Aid Effectiveness. She did not have as big of a role to play here, but her presence was important. As the US government representative, she committed to back the transparency initiative that helps to monitor and track aid money globally. While no, it was not a commitment to increase aid donations or move US focus away from donating to nations with strategic interest, Clinton’s presence was important to show that the US was present and willing to come to the table to work for an international agenda.

Last Tuesday, the 6th, Secretary of State Clinton was in Geneva and gave perhaps the most notable speech of her career thus far. Speaking at the UN, she discussed the global campaign to promote human rights, and end discrimination to the LGBT communities around the world. In a 30-minute speech, she outlined why “gay rights are human rights, and human rights are gay rights”.  With her international audience, she revealed that the current administration would begin taking the treatment of LGBT communities into account when offering international foreign aid in the future. On the same note, she recognized that the US is still far from an exemplar in our own treatment of the gay community; bringing recognition to how much work still must be done here as well. The speech can be watched here:

And the transcripts can be read here.

I find the work that Clinton is doing to be extraordinary. I think that she is using her platform perfectly in having the opportunity to reach a broad audience with perhaps more straightforward words than the President could use. One could not imagine Obama traveling to Burma, or giving a speech on LGBT rights without the entire world going up in arms over it. Clinton appropriately plays the role of the delegate, affording greater leniency in what messages she can convey with regard to tough issues, but is not impeded by placating a constituency and reelection. I believe that the words she spoke at all three events directly convey the Obama administration’s policies, but it is up to Clinton to speak such words on these issues.

Similarly, it must be noted that in all three of these examples, Clinton is speaking on behalf of a country that has continuously not abided by her messages. In Burma, the US called for sanctioning the country, limiting its development and essentially cutting it off from the rest of the world. Now, to go back 50 years later and say we want to help the people following specific conditions can appear a bit arrogant. In Busan, when calling for increased international aid, the US has continuously fallen short of its commitment as well. How does this reflect as the most powerful nation? Finally, and most visibly, the US continually persecutes the LGBT community, denying rights and perpetuating an archaic religious agenda. One must only go so far as to watch Rick Perry’s latest Presidential ad to see the blatant discrimination that this community faces every day.

While I think the work Secretary of State Clinton is doing is important for our country and one of the most challenging jobs in the government, I cannot say that I envy her job title. I think she is the perfect person to be in that role and the work she is doing is moving America’s foreign policy foreword in strides.  I believe that what Hillary Clinton is accomplishing must be recognized and respected, if not with air miles then with a little more appreciation.