I was born in Argentina during one of the country’s darkest period. I might have been too small to remember the turbulent times, but I grew up hearing the stories of disappearing youth, tortured protesters and despairing families. It is estimated that during the 1970s and 80s, approximately 20,000 people were killed by the country’s military; many whose bodies were never recovered.

This is not only a shameful part of Argentina’s history, but also of some of its neighbors, including Brazil and Uruguay. During this time, military dictatorships controlled the government, and leftist groups fought against them and their beliefs.

Anyone who was suspected of opposing the majority was tortured, killed or disappeared without a trace; this was especially true in Argentina. The repercussions of this period are still felt by many of this area’s residents.

Pedro Sandoval, 33, learned 5 years ago that he was the child of “disappeared” leftists. Many times, captive pregnant mothers were kept alive only until they gave birth and their children could be placed with military families. This was his case. His true identity was only confirmed through a DNA database trying to match the babies stolen during this era.

A new generation of leaders in the Southern Cone are trying to change history, better 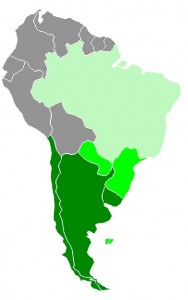 the image of the nations, and seek justice for the families of those who were persecuted during those decades. We can see this in Uruguay’s President Jose Mujica who was held in solitary confinement for years, and in Brazil’s current President Dilma Rousseff, who was a former guerrilla fighter and a prisoner and was tortured by the dictatorship.

With new presidents and stronger democracies in place, the tides are turning and previous laws protecting the perpetrators are being replaced with newer ones condemning the use of torture and the widespread killings.

Argentina: Last week, a dozen military officers who ran the most infamous detention center in the country’s history were sentenced to life in prison for the disappearances of thousands of leftist protestors. Since the nation’s amnesty law was overturned in 2005, 262 people have been convicted. There are 14 more cases currently being tried, and 10 more are scheduled to begin trial.

Brazil: The Senate voted to create a truth commission to probe crimes committed during the military regime that ruled South America’s largest country from 1964 to 1985.

Uruguay: The nation withdrew their amnesty law, which previously made it impossible to prosecute crimes committed during the military dictatorship that ended a quarter century ago.

As we can see, torture has often been used as a method of political re-education, interrogation, and punishment. In the United States, as many as half-a-million torture survivors reside, seeking refuge from the horrors experienced in their homelands. These individuals were brutalized by oppressive regimes like those in Brazil, Uruguay and Argentina because of what they believed, their affiliations, what they said or did, or what they represented.

What I found interesting during my research is that while these three countries view torture as unacceptable and morally-reprehensible, the U.S has gradually changed its perspective. In the decade since the September 11, 2001 attacks, there have been a debate in the United States about whether torture is justified in some circumstances.

The debates generally consist of two main opposing views. Mostly, figuring on the need for torture to retrieve sensitive information in regards to U.S security. One viewpoint finds that the need for information outweighs the moral and ethical arguments against torture.

A second perspective, opposes torture and finds it completely unecessary.  This opinion, which has been voiced by several high officials in the federal government, has pointed out that despite the former Bush Administration claims that waterboarding has prevented several attacks against the American people, they do not believe that evidence gained by the government through this form of interrogation has disrupted a single attack.

While I feel proud of my country of birth for the steps it’s taking to remedy a sad episode in its history, I worry about this country, which is now my home. I wonder if this new debate will lead this country in an unforeseen direction. I ask myself if decisions will be made that will mark the United States’ history with dark periods like those experienced by the Southern Cone nations. Maybe the U.S can learn from its neighbors from the South and learn from their mistakes and avoid decades of unrest, dissastifaction, and hurt suffered by its people.